There are many families worthy to be called “Rhode Island’s First Family of Hockey”. The Armys. The Ecclestons. The Gaffneys, The Warburtons, The Belisles, The Zifcaks, The Kilmartins, The Guays, and so many others . . . all have made enormous contributions to the sport’s rich legacy in this state.

“I consider the Bennett family probably THE hockey family of Rhode Island,” said Buster Clegg, who’s been involved in the sport at every level for most of his life and was the 2020 recipient of the Rhode Island Hockey Hall of Fame’s Malcolm Greene Chace Memorial Trophy recognizing “achievement and outstanding service by a Rhode Islander to the game of hockey”.

It started with the patriarch: Harvey Bennett Sr., a former goaltender who played for the Boston Bruins in the mid-1940s and then spent 12 years, from 1947-59, with the Reds, during which time he settled in Cranston with his wife Diana. It continued with five sons – Curt, Harvey Jr., John, Bill and Jim – who all starred in high school hockey at Cranston East and went on to play professionally, three in the NHL. Then came a third generation, Harvey Sr.’s grandchildren, who are also active in the game (including Jim’s son Mac, a Montreal Canadiens draftee who played in the American Hockey League in the 2010s).

But it goes beyond that. Harvey Sr. – as noted when he was inducted into the Rhode Island Heritage Hall of Fame in 2007 – was “a passionate promoter of youth hockey in Rhode Island and ran a Sunday morning hockey school at the Rhode Island Auditorium to teach kids from peewee through high school the fine points of the game. (He) later helped to found the Edgewood Hockey Association.”

“It’s a big hockey state,” Jim Bennett said in a video put together by the Rhode Island Reds Heritage Society, “and I’m certainly proud that my father was a part of starting it all.”

Harvey’s own journey started in Regina, Saskatchewan, where he and his siblings were raised by a single mother who died when he was 12. A hockey player from the time he was old enough to skate, he left school in the eighth grade to follow his dream.

“He had to figure things out on his own,” Curt said in a speech when Harvey was inducted into the American Hockey League Hall of Fame in 2013. “His self-reliance, his attitude to change your game, cut the Gordian knot, find a solution, believe in yourself when no else does. To outwit your opponent.

And his sons took their father’s lessons to heart.

“The only difference between us and many others who never really made the grade and had more, or equal, talent,” said Curt, “was my dad. It was him inculcating a belief that we could succeed.”

“(We) all had a passion to play,” Bill agreed in the Reds Heritage Society video. “And I think those were the two things that he gave us: The passion to play, and the consistency. And those two things made us make it, probably, because I don’t think we were even the best around. It’s just that we were persistent and we kept working at it, working at it. And this is what me and Jimmy and Harvey, we talk about a lot: What made us love it so much.”

– Curt, like his father, is a member of the R.I. Hockey Hall of Fame’s inaugural class. (http://www.rihhof.com/curt-a-bennett/) An All-American at Brown University, he was selected by St. Louis with the 16th overall pick of the 1968 amateur draft and became the first Rhode Island-developed player to make it to the NHL when he debuted with the Blues in 1970. He spent 10 years in the NHL with the Blues, New York Rangers and Atlanta Flames and also represented the U.S. in several international tournaments. Curt, who now resides in Hawaii, finished his pro career by playing two seasons with his brother Harvey Jr. in Japan.

– John also went to Brown and played one season for the Philadelphia Blazers in the World Hockey Association, which was in operation from 1972-79 and was the first (and only) professional league to compete with the NHL in the last 100 years. He hung up his skates for a successful career in medicine.

– Harvey Jr. played collegiately at Boston College and spent eight seasons in the NHL with the Pittsburgh Penguins, Washington Capitals, Philadelphia Flyers, St. Louis Blues and Minnesota North Stars before finishing up with Curt in Japan. He and Curt represented the USA in the first Canada Cup. Today, Harvey  is a successful Wendy’s restaurant franchisee.

– Bill, the only brother who didn’t play college hockey, was invited to training camp by the Flames when Curt was playing in Atlanta and took a journey through the professional ranks that culminated in his playing for the Bruins, his father’s old team – and his favorite when he was growing up – in 1978-79. And in his first game . . . well, let him tell the story.

“It was three to five seconds into my first shift,” he said in a where-are-they-now? interview with the Web site of the Waterloo Black Hawks, one of his earliest teams. “I jumped the boards and skated to the net and scored. My dad was at the game, so that was great. I wish I had the film.”

Bill also played in the NHL with the Hartford Whalers. He remains active locally as the manager of the Bennett Sports shop (which was started by his father) at Cranston Veterans Memorial Rink where he also continues to carry on his father’s teaching legacy running popular instructional schools.

(A little hockey trivia for you: Bill was one of two players – Sean Shanahan was the other – to wear No. 7 for the Bruins between Phil Esposito and Ray Bourque. Bourque, of course, voluntarily switched to No. 77 when the team retired No. 7 in honor of Esposito in 1988.)

– Jim, who followed Curt and John to Brown, was drafted by the Flames in 1977, spent two seasons in the minor leagues and later coached the very first hockey team at Providence Country Day. A successful businessman, Jim distinguished himself as a former Chairman of the RI Convention Center Authority.

-Mac, Jim’s son, also made his mark professionally. He was the 3rd draft pick of the Montreal Canadiens right out of prep school in the 2009.  Mac enjoyed an outstanding career on the blueline at Michigan. He signed on with Bobby Orr as his agent and went on to play three productive years in the AHL.

There was a sixth Bennett brother, Peter, the youngest of the family. But tragedy struck in 1973 when Peter, then 10 years old, fell through the ice and drowned at Roger Williams Park. In a speech introducing his father for induction into the R.I. Hockey Hall of Fame in 2018, Jim referenced his younger brother when, his voice catching with emotion, said, “The hockey community . . . Through triumphs and tragedy, the hockey community was always with the Bennetts.”

“I know that if Peter had survived, he too probably would have played professional hockey,” said Curt. “And that’s because the common denominator in all of us was my dad. He was a game-changer. He was pure Canadian, but his story is as American as Mark Twain’s or Yogi Berra’s.”

Harvey Sr. became an American citizen. Like most American parents of his generation, he put a premium on education. And his sons say he passed that on through hockey.

“The time that he put in, not just with us but with the thousands of kids who played hockey (in the clinics), ended up with kids going to college,” Jim said in the Reds Heritage Society video. “Even though he didn’t have an education himself, he was a big one on stressing education. I think hockey puts more kids into college than all the other sports in Rhode Island combined.”

He expounded on that in his Hall of Fame acceptance speech for his father.

“You’ve got All-Americans here, you’ve got NHL All-Stars here, women (hockey players here), Olympians here, it goes on and on,” he said, referencing the crowd at the induction ceremony. “All from the little state of Rhode Island. I think (Harvey Sr.) would be sort of amazed at that.

“But I think the other point is that how many kids went to college . . . (they) weren’t superstars, but they got into college. They got into junior college. And they got a chance to play and enhance their lives. And I think that was one of his messages.”

Not to be forgotten in the Bennett saga is mother Diana, who also came from Regina and whom Curt called “our role model”. And one night prior to Curt’s birth in 1948 – in a foreshadowing of how intertwined her family would become with its adopted state – she had a moment that can best be described as the Full Rhode Island.

“This is before I was born, but it’s a great story,” Curt said in his Hall of Fame induction speech in 2018. (https://www.youtube.com/watch?v=9DcgPGM2Y-o) “My dad was a goaltender. You know they razz goaltenders. (Someone) was razzing my dad one night, (and) my mom went down and hit him with her purse. Whack. The police had to take her away.

“But in court, the judge – Judge (Frank) Licht, who later became governor – said, ‘Mrs. Bennett, this man’s allowed to say what he wants to say. But you are also allowed to feel the way you do.’ And he fined her a dollar. 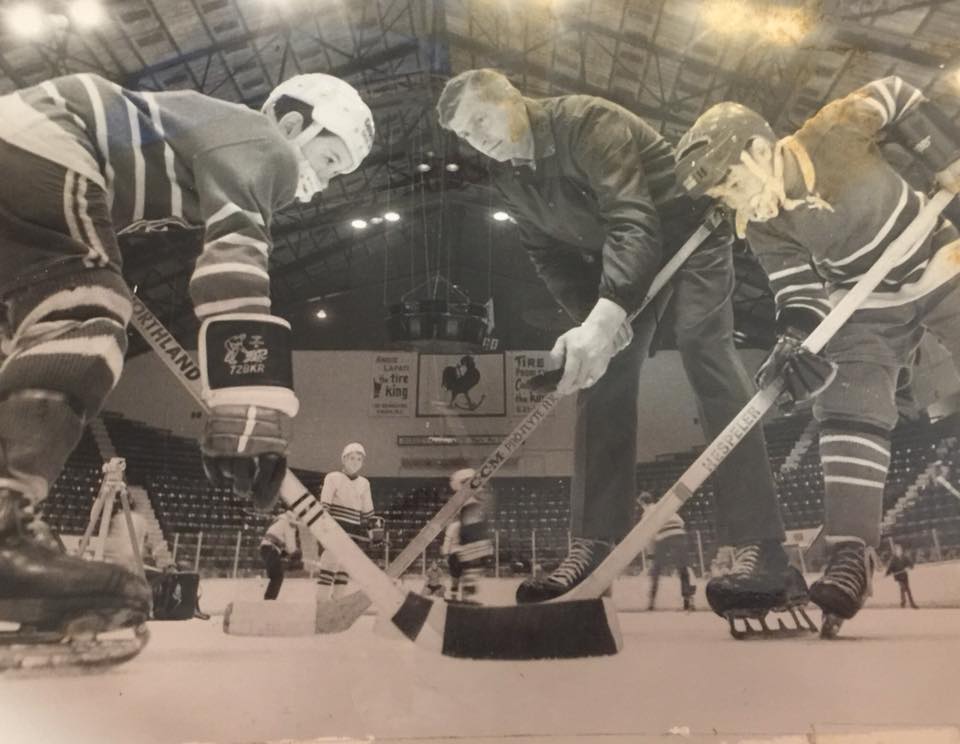