While history notes that Thomas Eccleston Jr. founded Burrillville High School hockey in 1938, the record book suggests that the Menard family deserves at least a sub-title billing on the cover of that story.

It was to Eccleston’s great good fortune that Maxime and Albina Menard, Canadian immigrants, had settled in Burrillville a half century before, looking for opportunity in the town’s booming textile mills. Their sons, Peter, Joseph and Maxime Jr., fathered nine boys who would power Bronco Hockey through eighteen of its first twenty-four seasons.

All had physical gifts, but trumping these were the gifts of character and work ethic instilled by their parents and grandparents, attributes that would enable the nine boys to play outsized roles in putting Burrillville hockey on the map from its infancy in the 1940’s through its dominance during the ‘50’s and early ‘60’s.

The Menards in those years led the Broncos to eight Rhode Island titles and a New England championship – not to mention a basket-full of titles in football and baseball, too. Some would excel at the collegiate level, as well, and one would gain national recognition for his coaching.

By sheer numbers, Peter and Emeline’s five boys had the most impact. Cleo, the eldest, played wing as a sophomore on Burrillville’s first Interscholastic League team in 1940-41. But with six girls in the family, Cleo postponed his education the following school year to work and support the family’s ambition that his little brother, George, who had distinguished himself as a student, would be the first Menard to go to college.

George, a freshman, took Cleo’s place on the team, and being a strong lanky kid with quick feet and good hands, soon was playing a regular shift. When the team lost one of its starting defensemen in the semi-finals of the State tournament, George stepped in capably enough that the “Rambling Rangers of the North Countree,” as Burrillville was known then, took mighty Mount St. Charles into overtime of game three before succumbing in the State Championship finals.

At Brown University, George was the keystone of the Bear’s hockey revival after the hiatus imposed by the war. As captain his senior season he led Brown to its first Pentagonal (later known as the Ivy League) title.  Menard earned All-East and Honorable Mention All-American honors. Also an outstanding catcher and twice the captain of the baseball team, he signed with the Yankees after graduation and spent three seasons in the minors before embarking on a career as a teacher and a coach, first at the Berkshire School, then at St. Lawrence University beginning in 1955.

Menard’s St Lawrence teams were dominant in the East for the next decade. Five times his “Larrys” reached the NCAA Final Four, including a three-peet in ’59, ’60, and ’61. The ’61 team won the first ECAC conference title and was the National runner-up. Menard’s record in 17 seasons was 204-127-14. Additionally, he coached fifteen seasons of baseball. He is a member of the Brown and St. Lawrence Athletic Halls of Fame, and in 1988 was the recipient of the American Hockey Coaches Association’s “Snooks Kelley Founders Award” for outstanding contributions to college hockey.

It was quite a record a record for his three little brothers and cousins to live up to. But when their time came, they were up to the task!

Next up was Donald, BHS class of 1950. A strong rangy defenseman like George, Don played in the very middle of Burrillville’s athletic Golden Age. Donald, too, earned three All-State selections. Two of his teams were State Champions, and the 1950 squad was the New England Tournament runner-up with Donald was chosen 1st Team All-New England.

Emulating George in other sports, Donald was a star end on two undefeated football champions, and a star utilityman and catcher on three State Champion baseball teams. At Middlebury College, playing in the super competitive Tri-State League, he was a three-year starter at defense, banging heads with the likes of RPI, St. Lawrence and Clarkson. An English major, Donald then spent a career reporting for the Woonsocket Call, covering many of the Broncos’ subsequent athletic triumphs.

By the time of Donald’s departure for Middlebury, next brother, Robert, was champing at the bit. Or rather, given that Robert would be a school-record three-time All-Stater at fullback, it may be more accurate to picture Robert Menard as “pawing the dust” like a fighting bull. Playing center for two successive State Champions and New England Tournament finalists, he was both a clever playmaker and a relentless presence in front of the net. His greatest moment came in the 1953 New England Tournament semi-final against title favorite and reigning champion, Hamden, which had handily beaten the Broncos earlier that season. Robert’s clever assist on the game winner and his backbreaker score late in the third won him 1st Team All-New England honors on top of his Rhode Island All-State selection.

Not to be outdone, the youngest Menard, sophomore Norman, was taking notes on the backbench. In 1954, Norman centered the second line on yet another Bronco regular league champion but would suffer a bitter loss to LaSalle in the finals of the State tournament.  As a senior, however, Norman led both the team in scoring and the Broncos back to the State Championship winner’s circle, earning him 1st Team All-State honors – the fourth of Peter’s sons to do so. And as with his brothers, Norman was a three-sport star: All-Class end on an undefeated football team and an All-State left fielder in baseball in his senior year.

Meanwhile, Peter Menard’s brother, Joseph, had also done the Broncos a couple of big favors. His sons were Arthur and William.

Arthur, a classmate of Cousin George, was a tall, hard-nosed three-sport athlete. His hustle on the hockey team was one of the essential complements to Cousin George’s finesse, playing a wing on that first Burrillville State Champion in 1944. Arthur also won backfield honors in football for the Broncos undefeated team that same year. After service in the Army, Arthur Menard would make his career with the Rhode Island State Police.

Little brother William first made the spotlight as a junior in 1951 when he centered the second line for the Bronco State Champions and New England runners-up.  His senior season, William was team scoring leader, earning All-State honors centering one of the most powerful lines in the school’s history: All-State right wing George Keeling, who later played with the Reds, and All-Stater Eddie Zifcak, later an All-American at St. Lawrence – coached by Cousin George – and a member of the 1958 US National Team. With firepower like that, William’s Broncos easily repeated as State Champions.

Peter and Joseph’s brother, Maxime Jr., gave us the last first-generation Menard contribution to Burrillville hockey: Maxime III. A tall, strong defenseman in the mold of cousins George and Donald, “Mike” Menard was part of Babe Mousseau’s smothering defense that in 1963 won the Broncos 12th State title and third New England championship. As senior in 1964, Mike was named All-State 1st team, the 6th of the cousins to win that honor.

Moving on to Providence College, he was elected team captain for the 1967-68 season but chose instead to interrupt his education to serve his country in the United States Marines. Mike did a tour in Vietnam and was discharged at the rank of Captain in 1971. Returning to PC that autumn to complete his degree, he played his final season on the blueline for Lou Lamoriello’s Friars.

In 1990, the Menard family story came full-circle in a fine sense when Mike succeeded 80-year-old Tom Eccleston Jr. as coach of the Broncos. Mike held the reigns for four seasons, adding two more championships to the Broncos’ record: the Met A Division title in ’91, and the Met B Division title ’93.

And the Menard legacy in Burrillville athletics has continued to the present. A rough accounting finds at least 46 descendants of Peter, Joseph, and Maxime Jr., boys and girls, alike, who have been awarded honors in the whole gamut of sports from baseball to wrestling – and, of course, hockey. 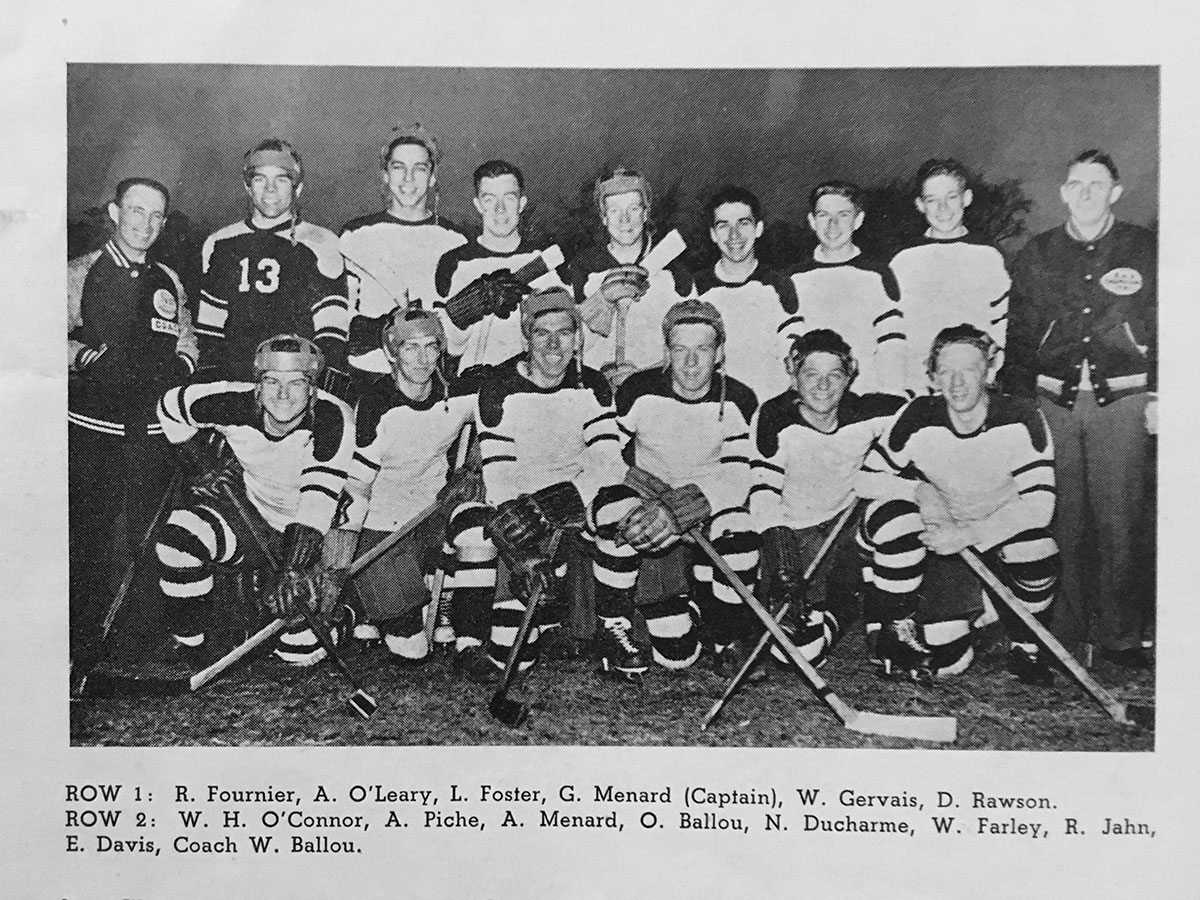