The story of the Belisle family and its accomplishments at Mount St. Charles is almost too incredible to be true.

But it is, even if at times it reads like fiction.

Normand B. “Bill” Belisle is the architect and backbone of one of the most famous families in Rhode Island hockey history.

Bill grew up playing on the ponds in his hometown of Manville. He always dreamed of playing hockey for the Flying Frenchman of Mount Saint Charles.

In 1945, Bill’s dream came true as he became a “Mountie.” He fell in love with the school. As serious a student as he was to be as a hockey player and coach, he achieved high academic scores while excelling in the game he loved so much. In 1947, he helped the Mount capture the Rhode Island state hockey championship. 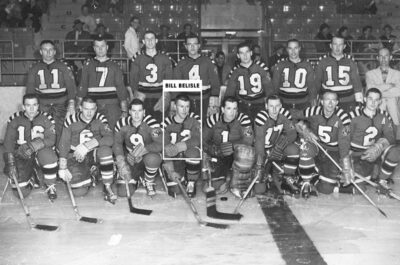 Bill continued playing hockey after high school. He skated for a few years for a semi-pro team called the Worcester Warriors and later displayed his talents in many men’s leagues, including the Rhode Island Scarlets. But as good as Bill was at playing the game, he ended up achieving his most outstanding accomplishments behind the bench.

After graduating in 1948 and a tour in the Army in the early 50’s, Bill married his high school sweetheart, Yvette Beaudoin. Together they raised four sons – William, John, David and Peter.

He supported his family as a heavy equipment mechanic. But he loved Mount St. Charles so much that he gave up the higher paying mechanic’s job to become the manager of Adelard Arena and then assistant coach of the team, which included sons, John and David. A year later, after a period of several losing seasons, the school put the fate of Mount St. Charles hockey in Bill’s hands.

That year was 1975 and Bill was on his way to an incredible journey that saw him become the most successful high school hockey coach in the United States. Under his leadership, Mount won 32 state championships, including a national record of 26 consecutive state titles (1978-2003). 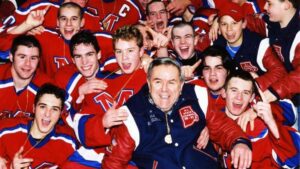 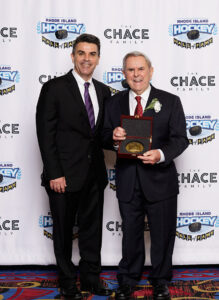 His sons, John, David and Peter, all played for their father at Mount Saint Charles. William, the oldest, attended Our Lady of Providence High School, where he was an outstanding baseball and basketball player.

John, class of 1976, played along with David on the first varsity team that Bill coached at the Mount. It was an important year in the glorious history of Bill’s great coaching career.

The season before Bill took over, Mount finished near the bottom of the standings with a losing record. In one year they leaped to third place and a trip to the semifinals. John continued his hockey-playing career at Assumption College, graduating in 1980. 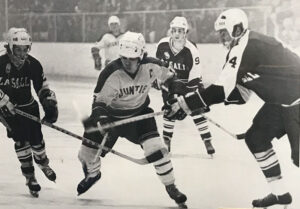 David played three years of varsity hockey at the Mount. In his senior year, he captained the Mounties to a first-place finish in the Metropolitan “A” Division with a record of 21-1 and a trip to the state finals, where they lost a thrilling game three final to La Salle Academy.

That game was played in front of 3,000 fans in the old barn on Logee Street in Woonsocket. David was selected as a first team forward on the Providence Journal All-State team and was named Mount’s Male Athlete of the Year. David went on to play two years of college hockey at Providence College from 1977 to 1979. He graduated in 1981. 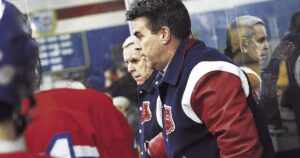 During his junior year with the Friars, David began his coaching career at Mount Saint Charles as an assistant. Called by his dad “my right-hand man,” David assisted in helping the team for 39 years, during which they captured 30 state titles.

In 1990, David married Nancy Strain and together they raised four boys, Brendan, Brian, James, and John. All four boys played youth hockey for the Woonsocket North Stars and the R.I. Saints. From 1998 to 2016, David coached 32 youth hockey teams.

David achieved a number of awards over his coaching career. In 2005 he was inducted into the Mount Saint Charles Hall of Fame and, in 2016, he was recognized by the R.I. Reds Heritage Society with the “The Sage Family Service Award” for his contributions to the game. In 2019, David was honored with election in to the R.I. Interscholastic League’s Athletic Hall of Fame.

In 2014, he was among 20 nominees for the Sports Illustrated Sportsman of the Year Award and was named a recipient of the Stan Musial Award for celebrating extraordinary sportsmanship. 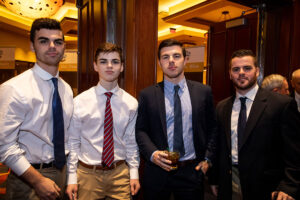 All of David’s four sons played at Mount Saint Charles.

John Belisle (2020) was a first Team All-State forward selection in his senior year and captained his team to a Co-State Championship.

The youngest of Bill Belisle’s boys, Peter, also followed in his father’s footsteps as a coach, carrying his father’s dedicated and passionate coaching philosophy to the college ranks.

Peter, class of 1990, was a member of two teams that captured the RI State Championship. After high school, Peter was a four-year letter winner for the University of Connecticut from 1991-1995.

During Peter’s playing career at UConn, the Huskies posted one of the greatest four-year periods in school history. Peter was a clutch performer. He is still the second all-time leading playoff goal scorer in UConn hockey history. In his junior year, he was the recipient of the team’s 7th Player Award.

His college hockey experience did not end after he graduated in 1995. It flourished even further when he found his true love of the game in coaching.

Peter then took his talents to UMass Boston, where he became the 11th varsity head coach in school history. The 2021-2022 season marks his 14th year behind the UMass bench. He ranks as the winningest coach in the program’s history with 193 wins and nine consecutive winning seasons.

In 2015-2016, Peter became the first coach in UMass Boston history to be named the Co-STX American Hockey Coaches of America (AHCA) Division III Men’s Coach of the Year. He was also named the New England Conference Hockey Conference Coach of the Year in 2016 after leading the Beacons to their best season to date. That year, UMass Boston won its first regular season and conference tournaments since 1982 and earned their first trip to the NCAA Frozen Four.

Bill Belisle’s extraordinary love of the game of hockey, his school, and, most especially, his players, brought national recognition to not only Mount Saint Charles but to all of Rhode Island. The sign in front of his beloved MSC reads “Mount Pride.”

There was no better man who exemplified those words more than Bill Belisle and today his players, coaches and, most importantly, his family, carry that proud tradition the right way – the Belisle Way.