Malcolm Greene Chace was born in 1875 in Central Falls, RI. He was a financier and textile industrialist who became director of the company that later became Berkshire Hathaway.

Malcolm was instrumental in bringing electric power to New England but before that, in the winter of 1894-95, he brought us ice hockey and is widely considered the “father” of this incredible game in the United States.

Malcolm was a world-class tennis player who would later be enshrined in the International Tennis Hall of Fame in Newport. He also played ice polo, the skating game that preceded ice hockey here in the States.

At a tennis tournament in Niagara Falls in 1892, Canadian participants told Malcolm, then a student at Brown, of a game that seemed similar to his ice polo. Two years later, at the invitation of the Victoria Hockey Club of Montreal, Malcolm, now transferred to Yale, assembled a team of 7 ice polo “experts”, among them 4 Brown undergrads.

Together, they barnstormed Montreal, Kingston, Ottawa and Toronto playing ice polo for the locals and learning the “rudiments of ice hockey.” The Canadians called them the “All-Americans”. On their return, the players organized hockey clubs at their respective schools – Brown, Yale, Cornell, Harvard, and Columbia. They also inspired the building of New York’s famed St Nicholas Rink and the game was given its roots in the United States.

The Chace family is proud to continue Malcolm’s legacy with the establishment of the Malcolm Greene Chace Memorial Trophy, an annual award recognizing “Achievement and Outstanding Service by a Rhode Islander to the Game of Hockey”. 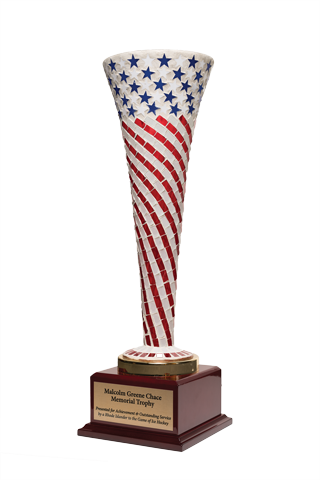