There aren’t many families in Rhode Island or anywhere else that have produced three Division 1 hockey players.

The Omiciolis – with brothers Kris, Mike and Drew – are members of that select group.

Kris, the oldest, played at Bishop Hendicken and Brown University. Mike, the middle brother, played at La Salle Academy and Providence College. Drew, the youngest, also played at La Salle and PC. After college, Mike and Drew went on to pro careers, both in North America and in Europe, including brief stints with the Providence Bruins.

West Warwick, the town where they grew up, always has been known for producing fine athletes, though not necessarily hockey players. The Omiciolis were fortunate enough to come of age during the greatest era of high school hockey in our small state, the 1980s and 1990s. 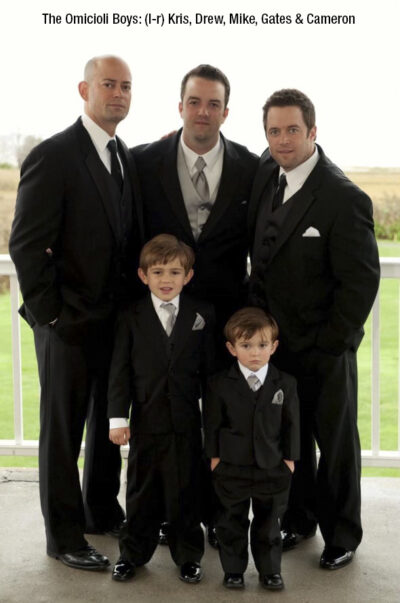 “My family is from Connecticut. Only Mike and I were born in Rhode Island. My dad (Andy) was a train master for the Providence-Worcester line. My grandfather was president of the union for Metro North (railroad),’’ says Drew Omicioli.

“My dad played baseball and football. A couple of my uncles, my mom’s brothers, they played hockey. There was a strong push from my grandfather, again on my mom’s side, to get us into it. Kris, obviously, was the first. They got him into skating. Me, being the youngest of three, with Mike in the middle, we all followed suit.’’

On the heels of the gold medal win by the United States at Lake Placid – “That’s the greatest hockey story of all time. It will never be beat,’’ says Drew — the ‘80s and ’90s were decades like no other on the local hockey scene.

NHL teams selected Rhode Islanders Brian Lawton (No. 1 in 1983) and David Quinn (No. 13 in 1984) in the first round of the draft. In 1995, Bryan Berard (No. 1) and Brian Boucher (No. 22) were first-rounders. David Emma won the Hobey Baker Award as college hockey’s top player in 1991. Youngsters in Cranston or Warwick or Pawtucket could dream that they could get there, too.

“Just in our neighborhood alone, which is so odd in West Warwick, we had myself and Kris and Mike. Tommy Sheehan (who played at PC) was right around the corner. Derek Chauvette (Mount St. Charles All-Stater who played at Brown) was just down the street. Mike and Russ Brown, they both played at Hendricken, our closest friends, were right across the street,’’ said Drew Omicioli.

“Our street hockey games were legit. I remember Brian Ridolfi (Mount St. Charles and Brown) would come over. We would have guys come in. Legitimately, I think at one point we had seven future Division I hockey players playing in our street hockey game.

“For West Warwick, which is basically known for football and maybe baseball, it was pretty crazy to have those guys, to be so familiar with them and to be able to learn from them. That was a huge part of the progression that I, individually, had, as well as Mike, having guys like that that we were constantly competing against. It was pretty surreal and pretty awesome to see everybody make it.’’

The brothers played most of their youth hockey with the Edgewood Hawks where they were prolific scorers.

“My dad coached us often. It’s pretty unbelievable. We still have his plays and his drills and stuff. Mike and I are dumbfounded by it because we look at it and, oh my God, he was so advanced, so organized with everything, especially for someone who didn’t grow up playing the sport,’’ said Drew. 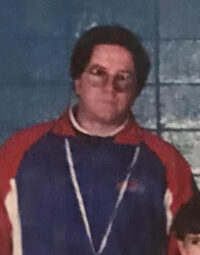 “He coached us often and we had some other guys, like Bobby Creamer and Otto Tingley, and guys like Greg Marcello who I had experience with. They were fun. They were great coaches and they helped throughout the process.’’

While the Omicioli boys were developing their skills, they had a front-row seat to watch superb players and great high school teams.

“Growing up watching (Robbie) Gaudreau and Emma, Mathieu Schneider and (Keith) Carney. We had a nice, long run of being able to watch what I think was the best hockey in Rhode Island history. From my brother Kris’ freshman year right into Mike and that La Salle-Mount series.

“I remember the Hendricken-Mount series (in 1988) and being a kid in the stands at Brown. It went to five games because the games kept going to overtime and they had to call them. I got to watch a good six years of it and then, obviously, I’m thinking, ‘I’m going to be playing on that stage.’ That was my goal,’’ said Drew.

“And then obviously you get there and go and compete. It was great to watch that whole era of hockey. That seven-to-eight-year span or maybe even 10-year span was phenomenal. Mount back then and Hendricken. Garth Snow and Derek Chauvette. All those guys. Bobby Creamer, Gaudreau. Steve King and that whole group of players.

“To think that there were that many NHLers out of Rhode Island high school hockey, you look at it now and say, ‘There’s no way that happened.’’’

After La Salle, Mike Omicioli played prep at the Gunnery before PC. Drew, who is a year younger, repeated his junior year at Loomis Chafee, then moved on to the Lincoln Stars of the USHL, and finally to the Friars.

“We actually played together for, like, three games. We played Boston College. They were No. 1 in the country. I can remember NESN came to our house, doing a special on it, and they asked Mike what he thought,’’ said Drew, whose wife Tiffany was a four-year player at the University of Connecticut.

“Mike, being 5-foot-5, you have to have a screw loose, right? Mike said, ‘We’re good, we’re going to beat them.’ I remember sitting there and thinking, ‘Oh man, you don’t poke the bear.’ He had zero hesitation. And we did beat them.

“I scored the first goal. It was me, Mike and Dougie Sheppard (on the same line). Mike had the assist on it. Mike got another assist on a power play goal. Then Mike dropped the puck to me, I took a slap shot, it was going in and Dougie poked it in. I ended up with a goal and an assist. Mike had three assists. 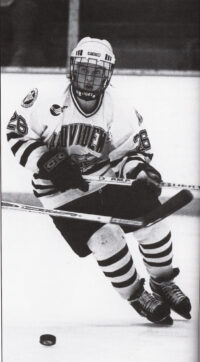 “That particular year was special because that was the first time any of the brothers actually were able to play together. But only three games and in the three games, I think I had seven points and Mike had nine.’’

The PC coaching staff put the brothers together again in the postseason.

“We were down 3-1 to UNH in the semifinals in Hockey East, but it was too late,’’ he said.

As pros, Drew and Mike played together in Italy and for the Danbury Trashers of the UHL. 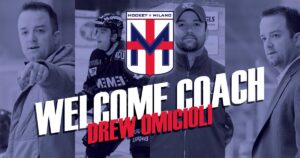 “To be able to have my pro career with my brother and travel to Europe, that was the greatest time of my life, for both of us. I was the leading goal-scorer in the league, for three years, in whatever leagues we played in. He was the top playmaker.

“But there was no more status as freshmen and earning this or whatever. It was go out and play pro hockey and you’re obviously paid and evaluated on your performance. It was such a breath of fresh air to get out of that college life. It was more free, allowed us to do what we needed to do,’’ said Drew.

“We played five years pro together and obviously we have a ton of memories and stories that will be forever engrained in our brains, for sure.’’

Some of those stories were told in the smash-hit 2021 Netflix documentary, “Untold: Crime and Penalties,’’ on the Danbury Trashers of the UHL, where the brothers were star players. More than a few reviews said that Drew and Mike stole the show.

“When it first aired it got to the point where it was kind of insane. Hundreds of text messages. All my European guys were contacting me. I think at one point I had something like 300 messages,’’ said Drew.

“Probably the funniest is, I was going across the ice for practice and there was a game that just ended and a kid goes, ‘Yo! You’re the guy in the documentary!’ People are spotting me, at all the showcases we go to now, other coaches, it’s been funny.’’

And now another Omicioli is on track for a possible Division 1 hockey career. Gates Omicioli, son of Kris, who is now coaching a strong East Greenwich HS team, is a promising winger for the Mount St. Charles 15-year-old midget team.

“When I watch him skate, he looks like us, his stride and everything else. To be able to watch him has been a blast for me. I’m such a fan of him and his work ethic and everything he does. So that’s the new era — keeping the Omicioli name going,’’ said Drew.