Carolina Hurricanes captain Justin Williams is not a Rhode Islander (and who knows if he’s ever even set foot in the Ocean State), but it’s worth noting that Williams is related to Rhode Island hockey royalty.

The 37-year-old Williams, who will be in the spotlight when the Bruins meet the Hurricanes in the NHL’s Eastern Conference finals starting Thursday night, is the grand nephew of Zellio Toppazzini, a charter inductee to the Rhode Island Hockey Hall of Fame. 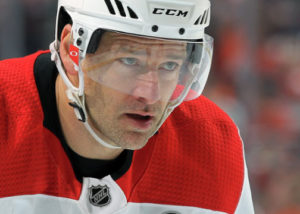 Undrafted, he has carved out a storybook NHL career since breaking in with Philadelphia in 2000. Williams owns three Stanley Cup rings – one with Carolina in 2006 and two with Los Angeles, in 2012 and 2014. He earned the Conn Smythe Trophy for playoff MVP in 2014.

His nickname is Mr. Game Seven and it’s easy to understand why. Williams’ teams have an 8-1 record in Game Sevens in his career. He is tied with Glenn Anderson for the most Game Seven goals with seven and holds the record for points with 15.

Williams’ most recent clutch performance in a Game Seven came a couple of weeks ago, when he set up the winning goal in overtime in Carolina’s upset victory over defending Stanley Cup champion Washington.

Given those remarkable accomplishments, it’s probably to be expected that Williams comes from a family with a rich hockey heritage.

Williams’ grandmother was the sister of Zellio and Jerry Toppazzini, a fine NHL player with the Bruins for a decade in the 1950s and ‘60s. That makes Zellio, who died in 2001, and Jerry, who died in 2012, great uncles of Williams. The Toppazzini bloodline runs even deeper. Grant Mulvey (Chicago Blackhawks) and his brother, Paul Mulvey (Washington Capitals) are nephews of the Topper as are a number of cousins who reached the highest levels of the game.

Zellio’s accomplishments in the game are legend in Rhode Island.  “Topper’’ was named the “Player of the Century’’ by the R.I. Reds Heritage Society. In addition to being in the Rhode Island Hockey Hall of Fame, he is a member of the AHL Hall of Fame. After retiring as a player, he coached Providence College for four season (Lou Lamoriello was his successor) and was a longtime high school referee.

Jerry was a player of some renown, too. He played nearly 800 NHL games, mostly with the Boston Bruins.

With bloodlines like those, it’s no surprise that Williams, too, has made his mark in the game.

Note: Williams was recently named a finalist for the 2018-19 Mark Messier Leadership Award. The award is presented annually to the player who exemplifies great leadership qualities to his team, on and off the ice, during the regular season and who plays a leading role in his community growing the game of hockey.