Everyone remembers where they played their first organized hockey. 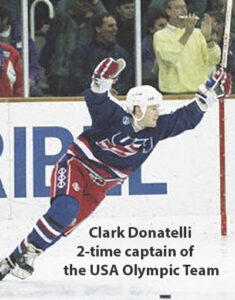 Clark Donatelli sure does.

It was the brand-new rink in his hometown of North Providence.

“I grew up playing there in mites and first-year squirts. Back then you played house league and travel. It was a perfect location. It was right there, five minutes from the house,’’ says Donatelli, who grew up to captain the U.S. Olympic team in 1992.

Sad to say, as a venue for hockey, the North Providence Arena did not last long.

The building is still there, a wrist shot away from North Providence High School, but for more than three decades it has housed not a hockey rink but a public swimming pool and fitness center and the town library.

The story of the North Providence Arena recalls a time when hockey’s popularity exploded in Rhode Island and all around New England. Captivated by the success of Bobby Orr and the Boston Bruins, every kid wanted to play.

Ice was hard to come by as indoor rinks were relatively scarce. Pre-dawn and late-night practice times were more commonplace than they are today.

In the late 1960s and early 1970s, Providence had the Rhode Island Auditorium and Meehan Auditorium. The Ice Bowl was on the Providence/Cranston line. There was Levy Rink in Burrillville, Adelard Arena in Woonsocket and St. George’s School rink in Middletown. Iceland, an outdoor rink, was in Seekonk. And that was it.

Then public officials and private groups went to work in Cranston, East Providence, Warwick, East Greenwich, North Smithfield and North Providence to get rinks built and meet the growing demand for ice.

In North Providence, partners Ernest W. Audet, Joseph DeAngelis, Ronald DeBellis and Michael J. Scarpellino persuaded the Town Council to let them put up a building on municipal land on the main thoroughfare, Mineral Spring Avenue. Mayor Mancini and the longtime city Recreation Director, Lou Cimini, also the coach of the LaSalle Academy hockey team, were ardent consultants to and supporters of the venture.

In particular, the fortunes of the North Providence High School team would dramatically change. No longer would practices for the self-proclaimed “roving gypsies” take place in the early morning hours on school days. Coach Chuck Gaffney’s charges now took to the practice ice next door to classes and right after school. Student body support and local interest dramatically increased, as did the attendance of loyal followers no longer confronted with miles of travel to games. So, too, did the team’s fortunes.

The rink’s opening also gave birth to a successful local youth hockey program. The fledgling league was due in great part to the organizing and coaching efforts of longtime city resident and RI Reds hockey icon, Zellio “Topper” Toppazzini, whose sons, Mike and Hugh, starred on the first state championship team the program produced. 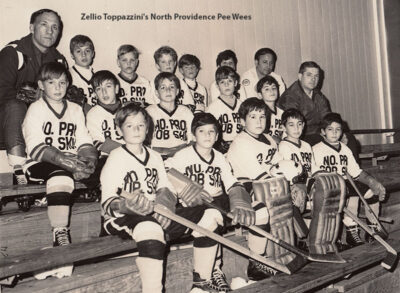 If it all seemed too good to be true, well, it was.

Complications – including the political shenanigans for which North Providence has been sometimes known – quickly came up.

A year after the rink opened, the owners and the town were at odds over the terms of the lease.

And, unbeknownst to the council and to the taxpayers, the Town Solicitor was a silent partner in the rink, a conflict of interest that was not revealed until 1977.

By the late 1970s, the price of electricity had skyrocketed due to two successive oil embargoes, the demand for ice time had cooled and, like a number of other RI rinks faced with a similar cascade of higher costs and unexpected events, the North Providence Arena was in trouble. 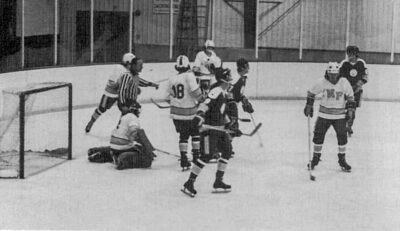 On March 11, 1979, the final Rhode Island Interscholastic League games were played at the North Providence Arena. Later that month, financial problems forced the closure of the rink.

As far as hockey was concerned, that was the end.

In February 1980, the building reopened for roller skating under the name Super Skates. It didn’t last long. The former North Providence Arena closed for good in August 1981. 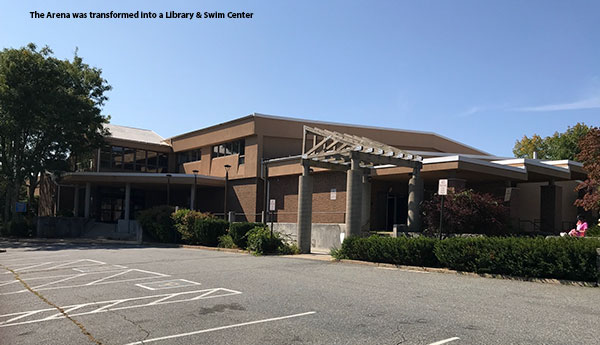 The town converted it to its current use as the Union Free Library and a pool and fitness center after buying the building for $346,000 in May 1983.

By then, a decade after he’d stepped on the ice at the brand-new rink, Donatelli was well on his way to a life in hockey that has included an All-American season at Boston University in 1985-86, stints on the U.S. Olympic team in 1988 and 1992, time in the NHL with the Minnesota North Stars and Boston Bruins, as well as a year with the Providence Bruins in their inaugural season in 1992-93.

It all started at the North Providence Arena, now one of Rhode Island’s lost arenas.