The Long and Lasting Legend of 17-Year-Old Norm Desaulniers

It’s every sports-minded young person’s dream to hit the home run that wins the game…nail the shot that beats the buzzer…score that sudden death goal. The ultimate thrill, however, as improbable as it might be, would be to someday “play in the bigs.”

If you grew up in Rhode Island in the early and mid century, the RI Reds were “the bigs”, our state’s professional and highly popular major sports team.

For hockey players during that time, those dreams were always front and center because the place where the pros played, the RI Auditorium, was also the place you played in if you played high school or college hockey in Rhode Island. 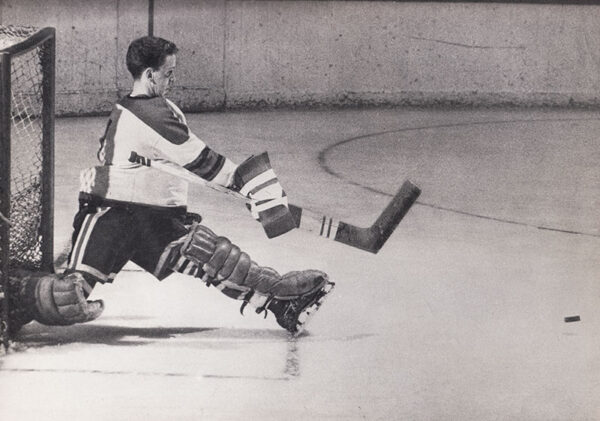 Such was the case for Norman Desaulniers.

Norm was born and raised in a family of seven in the Fox Point section of Providence, not far from the Auditorium. Like so many other young hockey enthusiasts from the neighborhoods surrounding the Arena, Norm became a “rink rat”, hanging around, doing odd jobs in exchange for ice time. Importantly, while sweeping popcorn and cigarette butts from the aisles, he sometimes got to witness Reds’ practices and fell in love with the notion of becoming a goalie.

A bright young man who skipped a grade in elementary school, Norm attended LaSalle Academy. And while he never played youth hockey or received formal training as a netminder, Norm was a natural in the position. By his senior year, the two-year starter for the Rams was the premier goaltender in the Interscholastic League and was a first team All-State selection. Still hanging around the Auditorium, he was applauded by the Reds’ players, who by know had gotten to know him well. 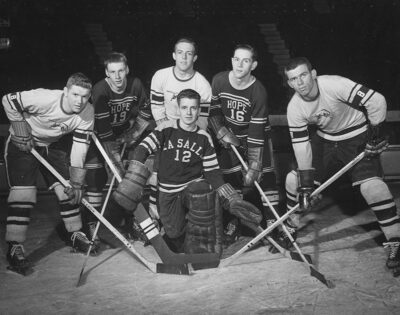 In the 1950’s it was still rare for a hockey team to carry more than one goaltender and it just so happened that the Reds needed an occasional practice goalie as Norm’s senior season finished. So between the pipes he went to face professional marksmanship for the first time, albeit in practice. He impressed Reds’ coach Terry Reardon who arranged for Norm to attend games, providing him with a parking spot close to the building.

No one really knows Reardon’s motive for the gesture. One may certainly have been for Norm to be available if in the rare event a goaltender for either team was injured during a game, Norm would be available as a replacement. The 1952-53 season ended with no such incident.

By the start of the following season, Pat Egan had replaced Reardon as player/coach. Norm had graduated and taken a job as a full-time bank teller. But he still attended Reds games. On Armistice Day, November 11th, the defending AHL champions, the Cleveland Barons, were in town. Eight or so minutes into the game, Reds goaltender, Harvey Bennett, was struck in the eye with a deflected shot. Blood gushed and a 15-minute halt in play was called as team physician, Dr. James McKendry stitched Harvey up but then declared Bennett unable to continue. 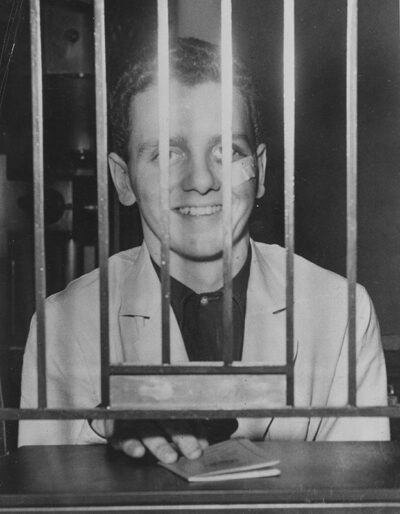 Newspaper accounts relate that owner Lou Pieri had suggested Chuck Scherza as a replacement. Egan even thought about donning the pads himself before he called for trainer George Army to summon just-turned-17-years-old Norm, who was still the Reds practice goalie. But first, Barons’ coach Bun Cook had to give permission for young Norm to suit up because his addition would constitute a 16th Reds player, one over the official limit for a game. He graciously did so.

Tom McDonough, the Reds’ stick boy at the time was tasked by George to retrieve Norm’s pads and equipment and handed him the keys to Norm’s car. Tom recalled, “It was a cold night and the pads were frozen stiff. We had to pound them to soften them up.

“Norm was shaking like a leaf,” he continued. “He came into the locket room with a small mouse under his eye from a stray stick he encountered in a pick-up game the night before. We thought it symbolic in a way. We told him it would be just like practice but with people in the stands – but just like practice.” Needless to say, the trepidation continued.

While it was a tough spot for Norm, it was also a difficult situation for the team. When play resumed with Norm in the nets, Reds beat writer Mike Thomas claimed in his news report of the game that the Reds, out of necessity, “skated and checked as they probably never had before.” Norm’s confidence grew while making nine saves in the opening period and seeing how hard the team was working in front of him. The period ended with both teams scoreless.

The holiday crowd was hushed when the Barons, shorthanded, pumped a 63-foot shot past Desaulniers early in the second. But jubilation reigned when the Reds responded with three tallies of their own in rapid succession against the Barons’ netminder, Emile “The Cat” Francis, to take a 3-1 lead into the third period. Again, Norm had stonewalled the Barons with nine saves. 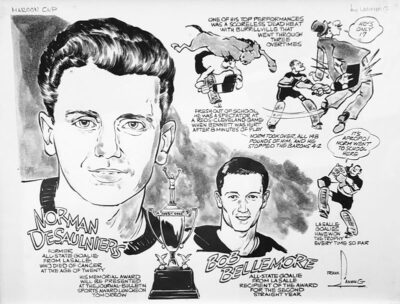 As expected, Cleveland grew more aggressive in the third period. Assisted for a time by a 4-3 manpower advantage, the Barons fired from everywhere trying to dent the net and Norm’s confidence, but the kid stood tall. Then Zellio Toppazzini lit the lamp for a 4-1 lead and the Reds never looked back, winning 4-2. Norm finished with 28 sparking saves for the night.

When the buzzer sounded, Harvey Bennett rose to cheer from the press box and the crowd gave young Norm “one of the warmest ovations given any athlete in the Auditorium for years,” Thomas reported. The players joined in and the kid was lost among his teammates, often being toppled by the players who were mobbing him.

The following morning, Norm was back at his bank teller window smiling at the Providence Journal headline proclaiming him a “Hockey Hero”. Associated Press news reports were carried in major cities and The Hockey Newsfeatured his extraordinary fete across North America. He was an overnight celebrity.

Buoyed by his experience and at the urging of Reds players, he would soon after take a leave of absence from his job for a tryout in Quebec with the legendary Citadelles of the Ontario Junior Hockey League.

According to his youngest brother, Bob, Norm had missed out on a scholarship offer to play at St. Lawrence University and Canada was his next best option to keep his hockey dreams alive. His recollection was that because he had played professionally for that one Reds game, and perhaps even paid, he had unwittingly forfeited his chance to play collegiately.

During his time in Quebec, Norm, struck by a shot, sustained a serious groin injury and soon returned home. He never full recovered but continued playing goal in the RI Amateur Hockey League for a time, helping the Cranston Nationals team to the league pennant the following year. 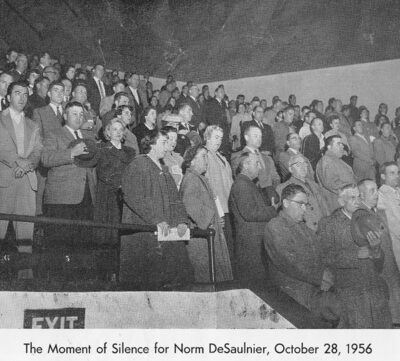 Norm was later diagnosed with testicular cancer. According to Bob, family and doctors surmised it might have been related to his groin injury. Perhaps because of the type of cancer and the mores of the times, the specifics and location of the cancer was kept from the community and much of the family. After a long battle and just three years after his historic achievement, Norm sadly passed away at the tender age of 20. Several days later, at the next Reds game, a moment of silence was held in honor of the young man so many in the stands had witnessed the heroics of just three years earlier.

In 1956, Norm’s family, headed by oldest brother Roland, established the Norman Desaulniers Memorial Award in conjunction with the RI Interscholastic League. For 10 years, the award was presented to the state’s First Team All-State Goaltender at the RIIL coach’s annual Awards Banquet.

It is safe to say that at age 17, Norm Desaulniers had made it to “the bigs” at an age and in a way that will long be remembered and spoken of.

Fittingly, in step with the long tradition of outstanding goaltenders produced at LaSalle, of which Norm was one, the first Norman Desaulniers Memorial Award went to Herb Simmons (below, 2nd from left) and would be followed by five other Ram netminders and others who are considered among the best ever produced in this great state of hockey. 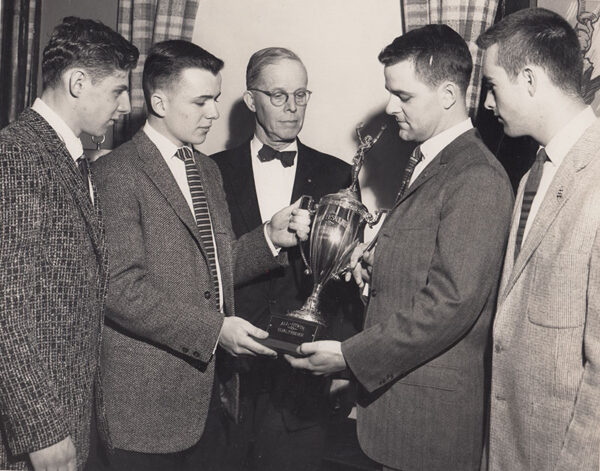