The Birth of Burrillville Hockey: Tom Eccleston Needed an Edge.

As the 1937-38 RI amateur hockey season began, a 28-year-old defenseman, Tom Eccleston, Jr., was playing in the state’s best amateur circuit, the Intercity League. His Greenville Townies played before paying customers at the legendary RI Auditorium. Tom needed an edge because the league had just announced that an Intercity League All-Star Team would be selected by vote of the fans to play later that season against one of the top semi-pro teams in the region, the Boston Olympics. 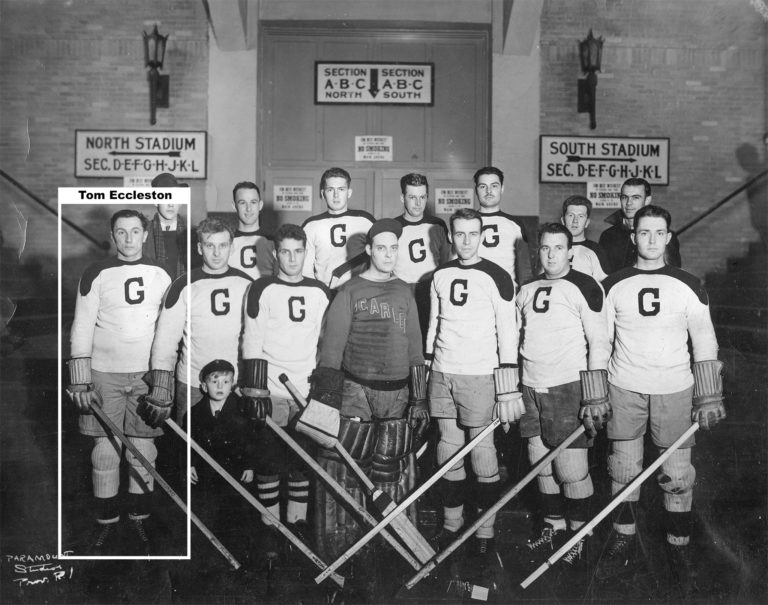 The Olympics were a team of former college stars, including former US Olympic and National team players, coached by Hago Harrington, a recently retired professional star for the Rhode Island Reds. (Decades later, a charter member of the RI Reds Hall of Fame and a 2018 inductee into the US Hockey Hall of Fame.)

The Intercity League All-Stars, to be called the Rhode Island Scarlets, would be coached by then Reds’ coach, “Bun” Cook. Cook, it was noted, would also have final say over the roster selections.

It would be the pinnacle of his hockey career, young Tom thought, if he made that team. But his chances were not assured. The words “hockey” and “Eccleston,” at this time, were hardly synonymous.

In fact, Tom Eccleston had come late to hockey. During his youth in Lewiston, Maine, the snow was so heavy that kids preferred to play the game in the streets between the snow banks, shod in boots and shooting a tennis ball. It was a move to hockey-mad Rhode Island the year he graduated from high school in 1927 that really got him started.

So the question now vexed him: How could he improve his game enough to get both the fans and Bun Cook to vote for him?

The answer came shortly one cold afternoon in Burrillville.

Tom was a young history teacher and football coach at Burrillville High School. He had done very well with the football program. He had started the team from scratch four years earlier, and had led them in the season just concluded to the first of eleven Class C championships he would compile in a 22-year career. And on this day when school ended, it was one of his football players who invited him to play hockey on nearby Mill Pond in Harrisville. Tom was delighted.

He scrimmaged with the boys for an hour or so, and then, watching the boys while taking a break, he had an epiphany: a hockey club! Why not start a hockey club with these boys? After all, a school hockey club of hardy teenagers who, in exchange for the fun of informal games every day, would happily turn out after storms to shovel.

Next morning his school principal was all for it and made an announcement to the classrooms. The next afternoon enough boys turned out to form a squad for each class. There would be no drills, no formal instruction, just games every day after school. And each day Tom would play defense for the weakest team in each game and never take a breather.

Tom had his edge. He would be getting more ice time that winter than anybody else in the Intercity League!

It worked brilliantly. The boys had a ball competing against each other, and when it snowed, they all turned out to shovel. Tom got two hours of skating every day, and when the time came for Intercity fans to vote and Bun Cook to pass final judgment, Tom had that extra jump in his step that won their confidence. He made the Scarlets.

True, the game was a bit anti-climatic. After ten minutes of somewhat even play, the Boston Olympics crushed the Scarlets, 12-3. But Tom had achieved his ambition of just making the team, and felt, anyways, that his play in the game had been no more embarrassing than anyone else’s.

Meanwhile, his schoolboys had improved their games, too.

Quite naturally, they began to wonder how they would stack up against a “real” high school team. They started pestering Tom to arrange a game. Amused but willing, he selected a “varsity” and put in a call to his old college pal, Wes Moulton, Brown University’s first All-American hockey player, who was coaching at the Pomfret School in Connecticut, “just over the hill” from Burrillville.

And, to the surprise of both coaches, the Burrillville boys played credibly, losing only by a 4-2 margin. One of Tom’s players was William “Babe” Mousseau, who would succeed Tom as hockey coach nineteen years later, and win seven State and five New England championships.

But at the time, no one was looking into a crystal ball. On their ride home through the woods, the boys just felt great that they had played half-decently against a “real” opponent.

The hockey club’s second season was a carbon copy. The boys had fun, Tom got in great shape again for the Intercity League, and in the club’s return match with Pomfret they lost this time by only a goal.

It was the next season, however, that marked the fateful departure.

While the 1939-40 club played its usual intramural schedule with Tom at defense for the weakest team, the “varsity” played two games against bona fide opponents and won both. They beat Pomfret 3-2, and much more consequentially, in a “home” game at Mill Pond, they gave Hope, a RI state semi-finalist that year, an 8-2 drubbing. And someone very important was paying attention.

Dr. William L. Callahan, the Principal of Burrillville High School, was a sports fanatic. He had played baseball at Holy Cross and coached the BHS team in the ’20’s. A strict disciplinarian and a driving taskmaster, the students called Callahan “Wild Bill” behind his back while the faculty called him “The Boss.” Callahan was also vice chairman of the RI Principals Committee on Athletics.

One spring afternoon, not long before school ended that year, Callahan called Tom into his office. He had a surprise for him.

“Tom, I’ve just entered a Burrillville team into the Interscholastic Hockey League for next season. Naturally, I’d like you to be coach. What do you say?”

Tom was flabbergasted. He had had no inkling! For years the grind of the football season had dictated his life from August through November, and to be relieved of that burden after Thanksgiving and just play the game of hockey through the winter was a therapy he was reluctant to give up. And it didn’t help, either, that any day now his first child was due. But “The Boss” was not a man to brook refusal. Tom swallowed his reservations and mumbled “OK.” And later driving home, re-winding the brief conversation over and over, he couldn’t help but focus on the one conviction that he had not been afraid to share with Callahan: “But you know, Dr. Callahan, we won’t win a game.”

And Tom was right. They didn’t.

Over the 1940-41 season, the “Boys from the North Countree,” as the press was fond of calling them, lost them all. They lost every game except for one tie in the next to the last game on the schedule, a 1-1 shocker against LaSalle – a LaSalle team that two weeks later finished runner-up to Cranston for the State title.

As teenaged athletes for a superior team are wont to do when playing the league doormat, the LaSalle boys considered the game an opportunity to pad their statistics. Eccleston, however, who by this time through his football experience had become a master of motivational psychology, had been working on his boys all week. By game time on Saturday he had them salivating and gnashing their teeth at the very sight of the color maroon. The “North Countree lads” harried LaSalle all over the ice, and made their goaltender look like Davy Crockett at the Alamo, albeit with a slightly happier result.

Up in the Auditorium press box, Jack Martin, Providence Journal sports columnist, was mightily impressed. In the following Monday’s edition he wrote:

Burrillville’s showing was the outstanding occurrence of the year so far, and it was an indication that both Cranston and LaSalle can call themselves lucky the season has no further to go. Coach Eccleston’s boys from the North Countree, pummeled around throughout the schedule, looked every inch a champion Saturday night.

It took a spell for them to get used to indoor ice, but there certainly never has been a better first year team in league competition. From now on, there will never be a season when Burrillville will not be a factor in Interscholastic League hockey competition.

The following season bore out Martin’s prescience. In 1941-42, Tom’s boys defeated defending champion Cranston in their first game, eliminated the Bolts in the State semi-finals, and took Mount Saint Charles into overtime in the third game of the championship series before being edged 2-1. But just 2 years later they won it all. Remarkable.

For Tom Eccleston and Burrillville High School, the wonderful and storied history of 24 Rhode Island and 5 New England titles had been born.