The 1963 Ice Bowl All-Stars: Ambassadors for our Nation & an Audience with a King

For a young hockey player several accomplishments are achieved during their pee-wee days. Some of these milestones might include scoring their first goal, lifting the puck, winning their first game, or for one bunch of Rhode Island pee-wee players – meeting the King of Sweden! 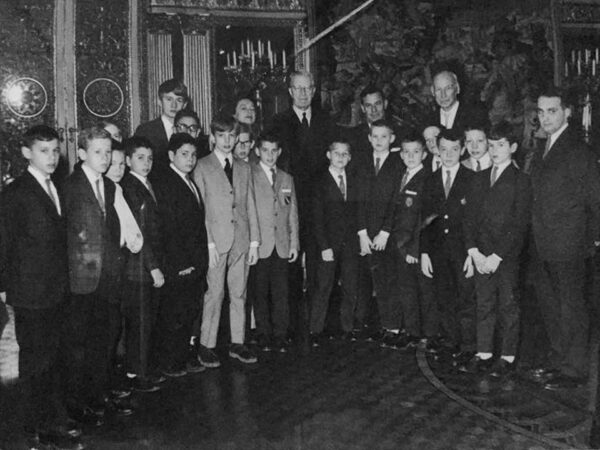 If after reading that last sentence you thought to yourself that your childhood hockey experience wasn’t this eventful, buckle up and brace yourself for what may go down in RI history as one of the craziest pee-wee hockey adventures of all time.

Coach Vandal was a veteran organizer of such excursions with league champions and teams he assembled from the Ice Bowl and other leagues. His squads included the likes of future NHLer Curt Bennett and a number of other future collegiate stars who had earned their chance to compete in annual international tournaments in Quebec, but this new Swedish adventure was to prove even more special.

The opportunity arose just prior to the Christmas season in 1963 as part of the international “People-to-People” Sports Friendship program created by president Dwight D. Eisenhower and continued under president John F. Kennedy.

The trip was initiated by the International Hockey Committee of RI, chaired by Henry Martin and described in correspondence from the People-to-People committee as the “first such tour ever arranged” and which would “contribute immensely towards further cementing the friendly relations which exits between ourselves (the USA) and the people of Sweden.” The caveat was that if parents could come up with $325, their young hockey stars could play overseas as ambassadors for the nation. It was the opportunity of a lifetime.

The team’s initial flight took off from New York City, headed for Copenhagen. When they arrived in Denmark they landed in a fog bank, resulting in their connecting flight being delayed. While officials figured out the best way to get the team to Sweden on time, the players gleefully explored the foreign airport, on scooters nonetheless, and naturally got into some trouble along the way.

After spending the night scooting around the Copenhagen airport, the bunch got the O.K. to board a flight to Stockholm. Since they were on a time-crunch, the only plane available to ensure them a prompt arrival was an old prop plane.

As they were nearing their destination, murmurs began to fill the plane. It would soon be known that the landing gear had dropped, but did not lock in place. This would require a skillful emergency landing by the pilot and crew. One could only imagine the horror that raced through the minds of the young players, nearly all of whom were first-time fliers.

Two members of the team, and now long-time friends, Paul Driscoll and Stu MacDonald, sat side-by-side on the flight and recalled their experience like it was yesterday. Like many of their All-Star teammates, they would go on to play for many years, in high school, college and beyond.

The two boys advanced in their own hockey careers together, later playing with the Cranston Lions bantam team in 1966 when they defeated Mickey Stevens, 4-1, for the State Championship. (BTW, Paul scored all 4 goals.)

The two parted ways during their high school years. Paul went on to play at LaSalle Academy, where he was honored with an All-State selection as a senior. He began his college career with a very productive season at Roger Williams University before transferring to Northeastern University. 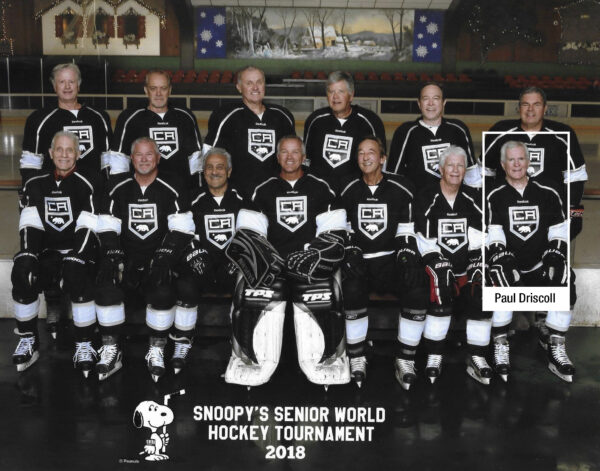 After graduation, Paul played in a bunch of “beer leagues” before heading to California in 1982. There, he continued to play hockey, including 20 years competing in the famous Snoopy’s Senior World Hockey Tournaments, sponsored by Charles Schulz, creator of the Peanuts comic strip. His teams won Gold several times beating senior squads from all over the USA, Canada, and Japan! Recent knee replacement surgeries have caused him to finally hang up his skates. “I’ll miss it,” he says.

Stu, now a CPA, was also an exceptional athlete and student. He starred on the hockey team and played quarterback at East Providence High School before transferring to Tabor Academy, earning a prestigious nomination to attend West Point. He later transferred to Brown where he played hockey for Jack Ferreira, then the freshman coach of the Bears.

In remembering their emergency landing in Sweden, Stu recalls being in the window seat with instructions for the passengers to put their heads in their laps and the kids braced themselves for the crash-landing. Undaunted, Stu took a peak and “could see the sparks” coming from the belly of the plane as it landed. Paul, in the aisle and not wanting to miss out on the action, begged to switch seats. Stu complied and Paul recalls watching as the airport crew hurriedly laid foam on the runway ahead to extinguish any flames. Thankfully, they and the team were unharmed, although the pilot broke his leg.

In stark contrast to their plane ride, over the next ten days and the Christmas holiday, the team enjoyed a life experience they’ll never forget. Between games, the team was provided with “nice chaperones that showed us around the city,” Stu remembers. They played eight games and were thrilled to not only be displaying their hockey skills in a foreign country but to do so on ice made by the same man responsible for making the ice for the Olympic Games.

When it was time to call it a night, they rested their heads in the same hotel as the Russian Men’s National Hockey team. Paul and Stu remember eating together in the same hall with them. Due to tensions between the Russians and Americans at the time, the two teams were not allowed to speak to each other despite the wide age differences. Soviet guards watched over them to make sure. 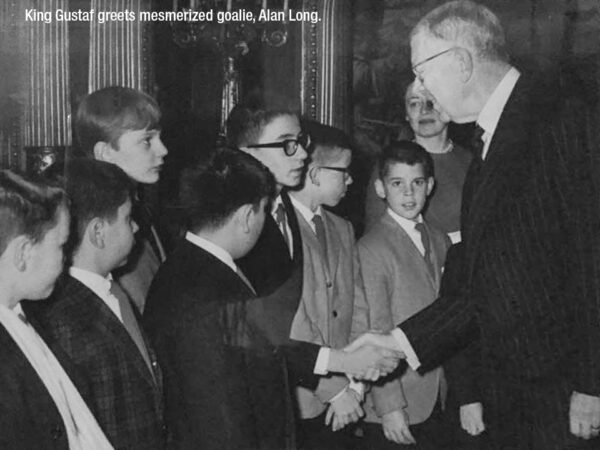 The icing on the cake came with a surprise invitation to meet a Swedish V.I.P. The boys got the idea that this was a huge deal due to the excitement shown by their Swedish chaperones. It really was a big deal. The team was invited to meet with none other than King Gustaf, Sweden’s head of state and head of government.

The visit included a tour of Sweden’s Royal Palace, stopping in “The Gold Room” and getting a private viewing of the stage where they present the prestigious Nobel Prizes each year. After the tour, in a large and ornately decorated hall, the players lined up as King Gustaf greeted everyone, shaking each player’s hand in a personal and friendly manner.

If the meeting was arranged to further alleviate the stress of the crash-landing, it definitely did its job. The King stayed and mingled with the team for a while, putting an exclamation on an unforgettable trip. Though scary at the start and though they did not fare that well in their games against the talented and experienced Swedish All-Stars, the players ended up receiving the real “royal treatment” and a story that would last a lifetime.

Their coach, Dick Vandal, “a funny guy” as Paul recalls and “a visionary” as described by Stu, gained more than just the satisfaction of his team playing overseas and meeting a real King, he even returned with a Swedish wife! And that, we suppose, is another story.