Burrillville High School’s accomplishments on the ice are legendary, not only in Rhode Island but throughout New England, as well. So, too, are many of the players and coaches it has produced.

It may be surprising to many that the most successful coach of all whose early contact with the game came with the Broncos is one who holds the ongoing record for most wins in the history of collegiate women’s hockey. He’s Rhode Island’s own Bill Mandigo.

Bill was a 3-sport standout at Burrillville High School and later at Wesleyan University in Connecticut. He has been the head coach of the women’s DIII hockey program at Middlebury College in Vermont since 1988. Now in his 32nd year behind the bench, his coaching record has grown to 587-155-45 for a remarkable .746 winning percentage. 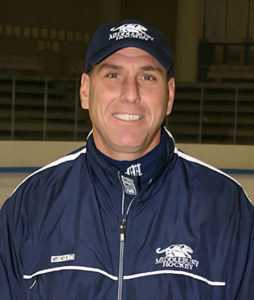 His 587 coaching wins are 72 more than the coach with the second highest total, former Olympian, Mark Johnson, head coach of the women at the University of Wisconsin. RI Hockey Hall of Famer, Margaret “Digit” Murphy, once held the mark for most wins while coaching the Lady Bears at Brown University, home of the oldest women’s hockey program in the nation. She ended her collegiate coaching career with 318 victories, placing her 13th among the winningest all time.

The Wesleyan alum began his coaching career at that Connecticut university, moved to the Hill School in PA for three seasons and then back to Burrillville High School for a year before taking over the women’s program at Middlebury.