The US Hockey Hall of Fame has announced that former Providence Reds star, Leland “Hago” Harrington, will be enshrined as part of its Class of 2018. Formal ceremonies will be held in Nashville, TN, in December.

Harrington’s induction will mark the 4th consecutive year that an honoree with Rhode Island roots will be enshrined in the US Hockey Hall of Fame, following Mathieu Schneider (2015), Bill Belisle (2016), and Ron Wilson (2017). 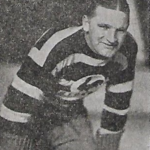 Hago, the first American-developed player to record a hat trick in the NHL, was born in Boston and was a pioneer in the development of Massachusetts hockey, both as a player and coach.

Reputed to be the most talented high school player at Melrose High School, Harrington joined the famed Boston AA Unicorn in the Eastern Section of the United States Amateur Hockey Association (USAHA) at age 19. In 1923, the USAHA was considered the top hockey league in the United States.

Following two seasons in the USAHA, Harrington signed a pro contract with the Boston Bruins in 1925. He scored his first NHL goal just three minutes into his first game and recorded his historic hat trick against the same Toronto St. Patricks just weeks later.

Harrington spent most of his illustrious career with our RI Reds, starting in 1928, just a few short years after the formation of the Canadian American Hockey League (CAHL). He skated for our hometown team for eight highly successful seasons and is remembered as one of the top players in the history of the “Can-Am” League.

After his retirement, Harrington went on to become head coach for the Boston Olympics, a team playing in the Eastern Amateur Hockey League (EAHL). He would lead the Olympics to four consecutive EAHL championships from 1944-47 before retiring in 1949.