George “Butch” Keeling and Ed Yagnesak may not be household names in RI Reds’ history, but for about a week in October of 1957 they were the talk of all local hockey. That’s when the “Asian Flu” reached North American shores and effectively decimated the Providence Reds roster as it was about to start the 1957-58 season.

The “Asian Flu” was a pandemic outbreak of influenza that originated in China in early 1956. By June, 1957 it had reached North America. The Reds had held their pre-season training camp in Three Rivers, Quebec, in late September and early October. That’s when the flu began to plague the team, first hitting the club’s star center Paul Larivee and then spreading to others. 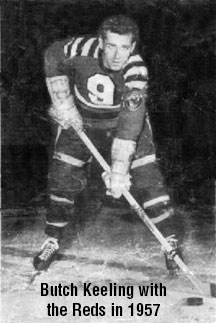 When training camp broke and the team returned to Rhode Island on Oct. 7 for the start of the season, six more Reds were down with the flu: John Hanna, Aldo Guidolin, Ray Cyr, Ken Davies, Jimmy Bartlett and Bob Robertson.

With only 11 skaters healthy enough to dress for the season opener in Springfield just two days away, management scrambled to get some temporary replacements to ice a team.

That’s when Keeling and Yagnesak, a pair of Burrillville High School graduates and former stars with coach Tom Eccleston’s perennial state champs of the 1950s, were called on to help fill the Reds’ need.

Eccleston got a frantic call for help from Reds’ coach Johnny Crawford. He then convinced his two 22-year-old former all-staters to pull their skates out of mothballs and help the ailing Roosters.

“I couldn’t believe it when coach Eccleston called and asked me to join the Reds for a few games,” George recalled. “At first I thought he was kidding me. Then I thought we’d get killed out there. But he was very persuasive and coaxed us into giving it a try.”

After a practice with the Reds, Keeling, a forward, joined veterans and future AHL Hall of Famers Zellio Toppazzini, Bruce Cline, and Bill Sweeney, along with Bruce Carmichael, Teddy Hampson, Mel Pearson and Eddie Shack.

A defenseman, Yagnesek, worked with future Reds Hall of Famers Andy Branigan and Ivan Irwin, along with rugged George McAvoy. Meanwhile, future AHL Hall of Fame goalie Marcel Paille was set to play his first-ever game for the Reds.

The Reds began the 1957-58 season as defending Calder Cup champions on October 9th in Springfield, very short-handed. But there was a huge surprise ahead for fans the next day as the Providence Journal headline read “Shack’s Goal Gives Flu-Ridden Reds a 5-4 Victory in Season Opener.” The sub-head: “RI Club Forced to Use Pair of Bronco Grads”.

“I think we were all shocked, even the veterans, that we were able to win that game with so few players, including five rookie pros along with Eddie Yagnesak and me,” George reflected.

With the recall of veteran defenseman Camille Bedard from their Three Rivers farm team, the Reds relieved Yagnesak of duty after his one-game assignment. However, even with the addition of veteran forwards Danny Belisle and Rene Pepin, the club kept Keeling for two more games.

The Reds traveled to Hershey on Saturday where, astonishingly, they upended the Bears with a 2-1 victory. They returned home for a Sunday match against Springfield and soundly dumped the Indians, 4-1, for an improbable sweep of three games to start the season.

How did George feel about his three-game win streak with the Reds?

“I was just happy to fill in and help. Johnny Crawford gave me about two shifts a period and the guys were great to me, especially Topper and Ivan Irwin. They made me feel at home and part of the team. It was really a great experience.”

Unfortunately, Butch passed away at age 84 on December 5th, 2017.  Eddie still lives in his native “blue and white” hockey town of Burrillville, filled with fond memories of once wearing red.