Remembering When the Friars Wore “Cooperalls”

Cooperalls were a brand of ice hockey equipment manufactured by Cooper Canada. The name has since become a generic term for all hockey pants featuring a waist-to-ankle outer shell.

Cooperalls were marketed from 1972 to 1975. Promoted as “a complete hockey uniform system”, it consisted of an elasticated girdle extending from the middle of the rib cage to the top of the knees, worn beneath a tracksuit-style woven nylon outer shell covering waist to ankle.

The Cooperalls were first developed to increase player safety and protection. The pads under the Cooperalls were held tightly to the body, unable to shift out of place like the current pads of the day, which would leave the player exposed to injuries, their tailbone in particular.

The girdle had pockets into which lightweight, compression molded foam pads were placed and the close fitting nature of the garment ensured that the pads always stayed in contact with the areas of the body they were designed to protect.

This replaced the traditional combination of short hockey pants and socks, and Cooper claimed that when combined with their own brand of extra light shin guards, shoulder pads and gloves, the system weighed 40% less than a conventional uniform. The system offered players greater freedom of movement and improved hip, pelvis and thigh protection.

The long pants uniform was first adopted by the Ontario Hockey in the late 1970s. In fact, all of the Canadian hockey league teams (OHL, WHL and Quebec Major JHL) wore Cooperalls as part of their Cooper sponsorship. Indeed, many high school and college teams wore them for a time, as well.

The system was also tested in training camps by a number of NHL teams, including the Winnipeg Jets and the Quebec Nordiques.

A similar style of girdle and long pant, called the “Propac”, was later manufactured by CCM. This design was worn by the Philadelphia Flyers during the 1981-82 season and the following year by the Hartford Whalers. Both teams had disappointing seasons. Looking for excuses, some pointed to the uni’s as the reason why. 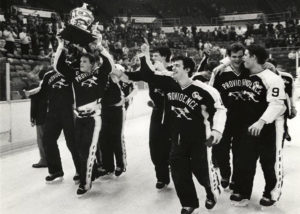 To the contrary and most notably, the Providence College Friars captured the very first Hockey East title in 1985 wearing the CCM Pro Guard design. Many think that the style made hockey players look taller. The Friars must have looked especially tall after their double overtime win in the title game against BC at the Providence Civic Center. Two weeks later they would play in the NCAA title game at Joe Louis Arena in Detroit, only to lose 2-1 to RPI. Must have been the pants.

The long pant design received considerable criticism. Player safety was called into question with the design. The nylon shell of the pants provided less friction with the ice during a fall, causing players to slide more violently into the boards.

Despite its lighter weight, there were complaints that the design was too warm. And those darn goalies, always looking for an edge, complained that the puck was difficult to see against long black pants.

The NHL subsequently banned the design. They passed a rule that teams had to wear short pants and home and away socks from the1983-84 season onwards. However, the long pants design remained popular in amateur hockey and inline hockey throughout the 1980s.

While many scoff at and scorn Cooperalls, others embraced not only their concept, but their look, as well. Parents loved the Cooperall system for youngsters. All they had to do was pull the pants over the girdle and shin pads; no need for a garter to hook up the socks.

There are many who are convinced the design will be resurrected. In the last 30+ years there have been many innovations and advances in fabric technology to the point that the basic excuse for banning Cooperalls in the first place, the slick fabric, could now easily be addressed by any number of equipment and textile manufacturers.

Just look at the advancements made throughout the sporting arena thanks to the leaps in fabric technology – in winter sports, like skiing, bobsled and luge, speed skating, ski jumping and snowboarding…and in summer sports, especially swimming, and track & field.

We think hockey is the next frontier.