Since its historic beginnings in 1898, Brown men’s hockey has endured two dormant periods. The first began in 1906, and play was not resumed until 1926. The second iceless stretch began after the 1938-39 season, when along with wrestling, hockey fell victim to the budget axe at the end of the Great Depression.

Fortunately, a group of hockey-loving Brown students continued to play and press for continuation of the sport petitioning the Athletic Council for reinstatement. Their November 1942 request resulted in the following response: “The Council looks forward with the hope that hockey can be reinstated… at some appropriate time.”

It would not be until 1946, however, that action was taken. Lou Pieri, a 1920 Brown graduate and owner of the Rhode Island Auditorium, offered its use and “guarantees” for two years. An informal team was promptly authorized for the 1946-47 season, and hockey was on the way back. The ’46-’47 team operated as an independent squad called the Clippers. The assistant coach was the campus barber Frank Mazzeo, whose informal club teams had been keeping hockey alive on campus.

It was, however, a former Brown great and first hockey All- American, Wescott E.S. Moulton ’31, who was the driving force behind Brown’s hockey revival, which officially began in the 1947-48 season.

“Wecky”, as he was affectionately known, was Director of Student Recreation, and doubled as head hockey coach. In an extended discussion with Brown President Henry M. Wriston, Moulton had convinced the Missourian that Brown hockey could indeed be successful. Wriston assented, and Moulton took it from there. What followed is a remarkably inspirational story, the stuff of legend!

Home games were played at the Auditorium, with few practices, at odd hours (frequently 5:30 a.m). Players had to transport themselves and their equipment to 1111 North Main Street, sometimes letting themselves in through the boiler room. They made their own ice, practiced, and returned to campus without showering, just in time for early morning classes (often 8:00 a.m.). Small wonder that Pembrokers (the young ladies of Brown’s women’s college) gave them a wide berth in class.

An outdoor rink next to Marvel Gym also provided practice ice, but was shared with intramural teams. Local ponds provided additional backup, the favorite being in the woods of Walpole, MA, where the ice froze early and hard. The itinerant pucksters also traveled to indoor arenas as far away as Springfield and Lynn, MA.

How Wes Moulton enticed top hockey talent to Providence speaks to the sterling character of the man. Enthusiastic and energetic, honest and trustworthy, kind and genuine, he was a super-organized, indefatigable recruiter who did his homework thoroughly. 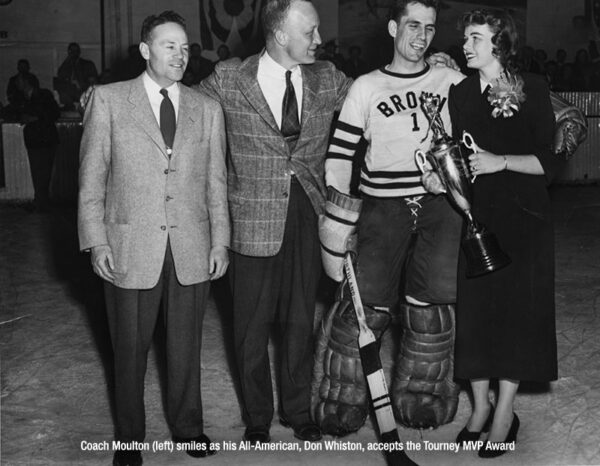 He plumbed the talent-rich greater Boston area and convinced the cream of the crop to come to Brown and help build something special. Many were wooed away from the established hockey powers: most notably Don Whiston ’51 from Dartmouth or Harvard, and Bob Wheeler ’52 from Michigan. Hailing from neighboring Massachusetts towns, the “W” boys both became All-Americans at Brown..

As Moulton stockpiled local talent, his teams steadily climbed the ladder of eastern college hockey. The inaugural season (1947-48) featured one Ivy win (Yale) and a home intersectional game with the University of California. The record stood at five wins, nine losses.

The following season the Bruins garnered their first-ever win over Dartmouth, and defeated Harvard in Cambridge, en route to a seven win – seven loss campaign. The record improved to 11-9 in ’49-50, and a “western” Christmas swing saw just eleven players and one goalie duel Michigan, Denver and Colorado College. Brown assured its first Pentagonal League (five Ivies) title by whipping Princeton, 8-2, in the season finale, dethroning Dartmouth, the perennial League champion.

The Moulton-men reached the pinnacle of college hockey in 1950-51, posting an 18-6 slate, repeating as Pentagonal League champs and finishing number two in the nation.

At the NCAA Tournament in Colorado Springs, Brown defeated defending national champion Colorado College, 8-4, on their home ice, the Broadmoor Ice Palace. The next day, on short rest, the Bruins lost to a Michigan aggregation that featured 23 Canadian players and had recently tied the Detroit Red Wings of the NHL in an exhibition contest. (In contrast, Brown had a total of only three Canadians during the entire Moulton era). Don Whiston, Brown’s All-American goaltender, was named Tournament MVP. 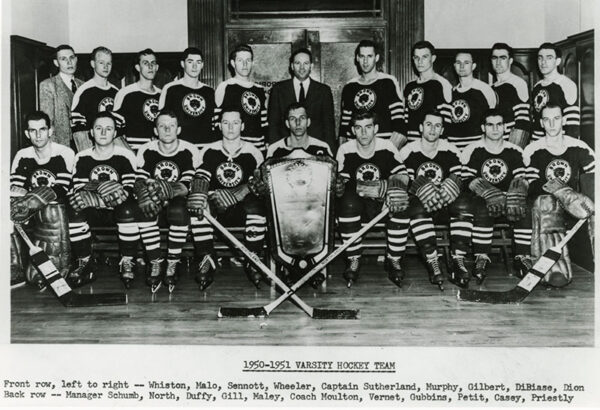 Interestingly, the 1950-51 team is the only hockey team to have been inducted into the Brown Athletic Hall of Fame, and years after their triumphant season. Ten years later, they showed they hadn’t lost their edge by defeating Jim Fullerton’s varsity on the day of Meehan Auditorium’s dedication in 1961.

All together, nine members of the 1951 NCAA runners-up were inducted individually into the Brown HOF, including the prolific scoring line centered by Don Sennott with Al Gubbins and Bobby Wheeler on the wings.

Wheeler and Sennott, in only three seasons of varsity play as compared to four today, remain among the top five point scorers all time at Brown. Wheeler still holds three Brown goal scoring records after all these years – most goals game (8), season (36), and career (86).

Sennott, who settled in Rhode Island, became a longtime organizer and coach at the youth hockey level, helping to mentor and develop a number of local players who went on to enjoy both college and professional careers.

The chief architect, Wes Moulton, was a man of great integrity, thoughtfulness, and compassion. His players held the utmost respect for “Mr. Moulton”.

Wes would “retire” after the 1951-52 season with an overall record of 54-38-1, again changing Brown hats in a move to the Dean’s Office. By any standard, his tenure was a golden age of Brown hockey, made all the more remarkable by the seemingly overwhelming odds which were overcome in the process.

As Don Whiston once stated: “He was a father figure, someone you could look up to.” When coach Moulton inserted little-used goalie Laurent Dion ’52 into the NCAA final against Michigan to give him the thrill of competing in a championship game, his players understood. They would have expected nothing less from the miracle worker of Brown hockey.