Miracles: The Miracle on Ice and the One that Came Next

Virtually every single American knows the ever-so-famous “Miracle On Ice” story of the 1980 USA ice hockey team during that year’s Winter Olympics, held in Lake Placid, NY. However, few are familiar with the events that followed for Team USA, as a country and the world’s ice hockey community wondered if the Americans could do it again in 1984.

The thought of perhaps the greatest upset in sports history triggers in our minds the sound of Kurt Russel’s voice echoing “AGAIN,” as he portrays legendary coach Herb Brooks in all his intensity, during the superb movie, Miracle. Well, did you know that Team USA came oh so close to not even qualifying for a chance to do it all over “AGAIN” in Sarajevo during the Winter Olympics in 1984?

All the blood, sweat, and tears required by a valiant Team USA to defeat the all-time great and powerful Soviet Union team on their way to the Gold medal in 1980, was followed up by a last place finish by Team USA at the 1982 World Ice Hockey Championships in Finland, relegating our beloved red, white and blue to the sport’s B-Pool. Yes, Team USA went from the penthouse to the outhouse and looking up, after finishing 0-6-1 in ‘82, scratching out a 5-5 tie with Germany on the last day of the tournament. In turn, Team USA was bounced from Pool A and an automatic berth at the ‘84 Games, and, in order to defend their Gold medal in 1984, they were now facing a do-or-die situation heading into the 1983 hockey season.

Rhode Island native and Princeton University star forward, Eddie Lee, was leading the collegiate ranks in scoring when he got called upon to join Team USA just before the 1983 B-Pool championships. 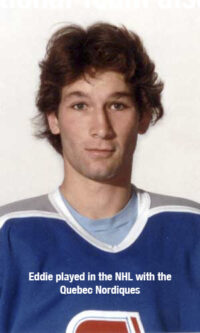 Lee, a 1981 fifth round draft pick of the NHL’s Quebec Nordiques (Colorado Avalanche) and the first-ever Mount St. Charles player drafted by an NHL team, set off to meet the team in Alaska, where he encountered many of the legendary players from the 1980 team, as well as fellow Rhode Islander and soon-to-be NHL first-overall draft pick, Brian Lawton. This was a dream come true for Lee, as he recalls Team USA’s 1980 victory as the inspiration behind his decision to decline an offer to play in the NHL, because he had his heart set on playing in the Olympics.

When the time came for the team to head to Tokyo, the hard reality began to set in for the players — they would have to win the B-Pool championship in order to guarantee Team USA the chance to defend its 1980 Olympic title. Today, Lee recalls those moments being filled with “terrible pressure,” though his mindset was one of gratitude, stating now that he was “along and all in for the amazing ride.” Interestingly, Lee noted that he and his teammates were also struck by the number of people wearing masks in Japan – adopted as an act of voluntary courtesy to others in a country with very densely populated cities like Tokyo.

Team USA’s game against Austria towards the end of the tournament was critical. A loss would have ended their hopes for Gold. Trailing 3-2 with time running out late in the third period, Lee jumped over the boards on a line change and found himself racing towards the Austrian goal as teammate John Harrington was just stepping out of the penalty box.

Harrington, famous for assisting on Mike Eruzione’s game-winning goal against the Soviets in Lake Placid, stole the puck from an Austrian player, and shoveled it to Lee. Eddie carried the puck down the right side and over the blueline, and when the defenseman drifted back toward the middle of the ice, he snapped off a low, hard shot from the right faceoff circle that scaled past the Austrian netminder and off the far post to tie the game, finishing 3-3.

Harrington-to-Lee helped Team USA remain undefeated, finishing the B-Pool tournament with a record of 6-0-1 and out-scoring their opponents, 53-15! Thanks in great part to Lee’s last-minute, game-tieing goal, Team USA went from Mission Impossible to Mission Accomplished. The US National Team would now have a chance to defend its title in 1984.

As for Lee, he notched 5 goals and 3 assists in 5 games and went on to make the US Olympic Travel Team that summer, where he remembers being “treated like gold!” Also that summer, Team USA competed in a 4-game set against the “Wings of the Soviet”, with Lee scoring a goal and adding an assist in a 4-2 vicory, the only game the USA won in that series. Despite his promising potential to help the Team USA title defense in 1984, Lee ended up leaving the team and his Olympic dreams behind. He would return to Princeton that year to finish his collegiate career and graduate. Later that year, he was in the professional ranks. 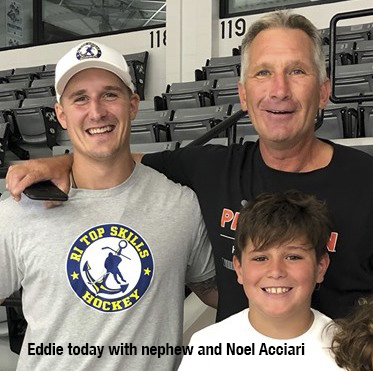 Eddie was raised in Bristol, RI, but was actually born in Rochester, NY, where his mother went into unexpected labor during a trip. He remains the ninth-leading point scorer in Princeton history, with 106 (42G/64A), and is seventh in career assists. An educator for over 30 year, Eddie became the first Princeton Tiger to play an NHL game when he laced up for the Nordiques in 1984. His larger than life image was the first of modern-day Tigers’ hockey alumni to be displayed on the walls of the university’s famed Hobey Baker Memorial Rink, commemorating his many achievements on the ice.

And now for the rest of the story. The pressure didn’t end for Team USA when they earned their way back into the Winter Olympic tournament with its B-Pool victory in Tokyo.  Quite the contrary. With very large skates to fill, coming off of its 1980 victory, our US National Team began its 1984 Olympic journey with more than just the weight of their jerseys on their backs. They had the expectations of the entire country on their shoulders, too.

Led by new coach Lou Vairo, and despite the talents of a handful of future NHL superstars such as Pat LaFontaine, Chris Chelios, Al Iafrate, Ed Olczyk, as well as Rhode Islander and future NHLer, Paul Guay, the team lost its first two games against Canada (4-2) and Czechoslovakia (4-1) , on its way to a 2-2-2 record and a seventh place finish.

Though the end-results may not have been ideal in 1984, to the players tabbed with leading the charge during the B-Pool championships in Tokyo, including Rhode Island’s Lee and Lawton, 1983 was a miracle in its own right.