Michael Spinks vs Harvey Bennett, Jr. Boxing in the City of Brotherly Love

Back in the summer of 1977, Harvey Bennett, Jr. was coming off, perhaps, his most eventful professional season.

He started the 1976-77 campaign with the Washington Capitals but was traded to the Philadelphia Flyers in November. During the season he was chosen to play alongside his brother, Curt, with the US National Team. The brothers were then selected to represent our country with Team USA in the very first Canada Cup.

As chance would have it, Leon and Michael Spinks had both won Gold Medals in the 1976 Olympics in Montreal. The following year they would be turning pro. Their promoters scheduled the matches at The Spectrum in the great fighting city of Philadelphia. Their training turf was Joe Frazier’s Gym in South Philly.

Coincidentally, immediately following the NHL playoffs, Harvey Bennett was already in training himself, preparing for his first full season with the bruising Philadelphia Flyers in what some might consider an unlikely place – a boxing gym on Broad Street. Yes, the same Joe Frazier’s.

Harvey’s Flyers teammates, Bob “Houndog” Kelly and Don Saleski, had just finished trials in Toronto for their behavior on the ice and they, too, were training at Frazier’s. Hmmm. Questions arose as to whether Flyers’ owner, Ed Snider, had his players’ golf games in mind (btw, Harvey’s is very good) when he approached former boxer Dan Bucceroni to keep a few of his boys busy during the summer teaching them how to throw a combination.

“Fighting on the ice and solid ground are very different,” insists Harvey. “You can’t get your balance on skates and on the ice you’re always grabbing onto a guy. It’s two different worlds.” Hockey players understand that, including the Bennetts.

They brothers learned the game and grew up in a time we know as “old school hockey” – when words like melee, fisticuffs, donnybrook and pugilist peppered the paragraphs of game recaps. They weren’t instigators. They just knew how to handle themselves and not back down. When asked about the occasional fight he found himself in, Curt famously explained that he preferred to fight with his gloves on for “wider contact.’

Bucceroni told the press, “You’ll find Harvey looking more professional if he gets in a fight on the ice now. These lessons will change him. The Flyers’ boys won’t be flailing their arms around and using up energy.”

As explained, Harvey was certainly not a novice at the sweet science. Several summers earlier, he began dabbling in the sport with Curt, then a standout with the Atlanta Flames, and brother Billy, then a Boston Bruins property.

Harvey remembers, “Billy was 6’6”, 240. Boy could he hit. We were sparring once and hit me right between the eyes. I said, ‘Aw bleep’ and dropped my gloves to my side. He hit me right between the eyes again and did I feel it. I’d rather be hit with a fist than a glove. The pain is more local. With a glove you feel it everywhere!” Curt already knew.

Harvey recalls Frazier’s trainer, Sam Solomon, telling him he hit harder than any white man he’d seen. That was the come-on, we suppose, for what was to follow.

The promoters asked Harvey if he would help them promote Leon’s first professional fight scheduled for a few days later. He agreed. It was decided that they would go 3 rounds at Joe Frazier’s Gym to create some photo ops for the Spinks’ debut. Harvey recalls, “Well, when I got there, the place was packed. It turned out that Leon had cracked a bone but I would work out with Michael Spinks instead.” 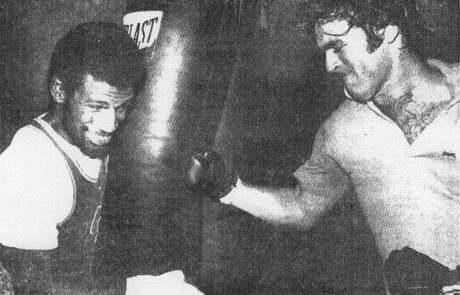 So, Harvey prepared – pumping some lefts and rights into the heavy bag and the bag saluted him by rocking back and forth violently while Spinks held it. “Mike was a class act and 30 pounds lighter than me.”

Harvey says that while punching the bag he made it a point to convince Michael that it was in everybody’s best interests not to be too aggressive and make him look bad. “I had this fear of a photo of me being knocked out appearing in every newspaper in North America.” They then climbed into the ring for some easy-does-it rounds with the cameras flashing. The story and the photos were then flashed around the world.

“It was amazing how much publicity it got, not just in Philly but all over North America. I can honestly say that I was never so nervous in my life.”

“I met Joe Frazier,” Harvey said admiringly. “He told me that hockey players were nuts. Michael called hockey dangerous. ‘They carry sticks and wear big gloves. They probably have iron in those gloves.’ ” Not so, but we suppose it can sometimes feel that way.