LaSalle’s Clem Harnedy – in his time, “The greatest goalie ever developed among native-born Americans.”

New Englanders know Walter Brown as the former owner of the Boston Bruins, who later founded and owned the Boston Celtics with his close friend and RI Reds’ owner, Lou Pieri.

However, Brown’s greatest contribution to sport may have been the development of hockey in the United States, which he influenced for over three decades. Among his many accomplishments before serving as president of the both the AHA (forerunner to USA Hockey) and the IIHF was guiding the USA to it first gold medal in the Ice Hockey World Championships in 1933.

The following year as his new squad, the U.S. Rangers, toured Europe and headed for Milan, Italy, to defend its world title, Brown pronounced to the world that his 20-year-old netminder, LaSalle Academy’s Clem Harnedy, was the “greatest goalie ever developed among native-born Americans.”

Harnedy was a 3-time All-Stater at LaSalle Academy from 1930 to 1932 and spent much of his after-school time at the then new RI Auditorium. It was a time when professional hockey teams like the RI Reds carried only one goaltender. As a teenager, Harnedy became the team’s “mascot” and played net for Reds’ scrimmages, learning the speed and nuances of the position facing professional talent while being mentored by Reds’ Hall of Fame goalie, Paddy Byrne.

After his World Championships performance, Clem would remain overseas to play for the Richmond Hawks in the English League. In 1935, he joined the Pittsburgh Yellow Jackets of the Eastern League, sharing goaltending duties with future Bruins Hall of Famer, Frank “Mr. Zero” Brimsek, who was two years his junior. 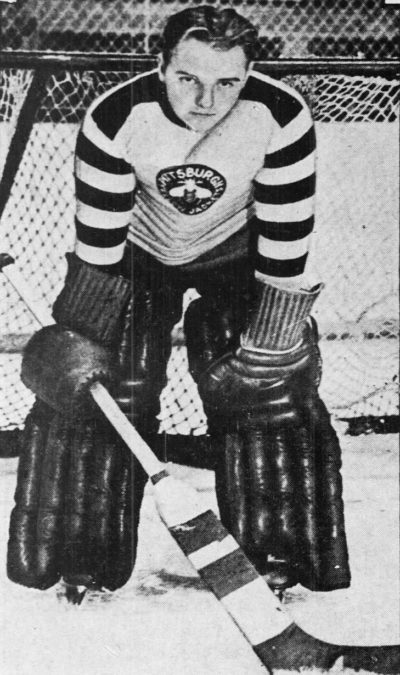 During that season with the Yellow Jackets, Clem was involved in one of the most unusual happenings in the sport’s history. He was traded for a single game to the evening’s rival team, the Hershey B’ars, which had lost its only goaltender to injury. Remarkably, Clem bested Brimsek while backstopping a Hershey win. He was back in a Yellow Jackets’ sweater the next morning.

The following season, Harnedy split the season with Pittsburgh and the famed Holzbaugh-Ford amateur six, taking the Detroiters all the way to the finals of the national AAU championships held at the Boston Garden, where he lost 1-0 to his great admirer, Walter Brown, then coach of the Boston Olympics.

Surprising to many today, Southern California was a hotbed of big-time college hockey in the 1930’s. During that decade, lured by the swaying palm trees and sunshine, several former RI high school and amateur stars headed 3000 miles west to the campus of the University of Southern California to continue their hockey careers.

Classical netminder Joey Roberts was the first, captaining USC in 1933-34. Howie Smith, out of Aldrich High School in Warwick, and Nat Harty, former Commercial High star, followed in 1935-36.  Hope Street’s rugged Sid Lovitt left the Inter-City Amateur Hockey League at the Auditorium and became a Trojan in 1939-40 after a season with the Hollywood Athletic Club.

However, the most successful among the former RI All-Staters to go westward was Harnedy. Still considered the finest amateur goalie in the country, he starred in the Trojan nets from 1939 to 1941. USC played its games at the Tropical Ice Gardens, a 13,000-seat outdoor rink in Westwood and at Hollywood’s all-seasons Polar Palace.

Smith, Harty and Harnedy would all continue playing in the Southern California and Pacific Coast Hockey Leagues after finishing up at USC. At one time of another, several of the Rhode Islanders would get parts in Hollywood pictures, including King of Hockey and The Game That Kills.

The greatest disappointment in Clem’s illustrious career undoubtedly took place in the fall of 1943. On the day before opening the 1943 NHL season in the nets for the Chicago Blackhawks, a back ailment, which had plagued him from time to time over his career, reared itself. He never fully recovered. He would return to the PCHL for three final seasons, retiring in 1946 and never having displayed his remarkable talents in the NHL.