Bob Ricci’s done all right for himself. The 62-year-old Pawtucket native lives in California, working as a Strategic Account Manager for the Industrial Division of Sherwin-Williams Paint. It’s a good job with an important company that has commercial and retail customers around the globe. Maybe it’s not what you dream of as a kid, but as an adult you know you’ve accomplished something if you reach that level of corporate America.

Besides, his childhood dreams were already fulfilled. Not long after childhood, in fact.

The 1960s and ’70s was the era of Bobby Orr and the Big Bad Bruins in New England, when virtually every game was televised by Boston’s Channel 38 at a time when the number of sporting events available on TV was a small fraction of what people can watch now. That constant exposure turned a region that loved hockey into one that worshipped it. And, like most boys who grew up in the area, Bob Ricci fantasized about playing professionally at the game’s highest levels.

He was slightly built, though; even by the time got to high school he was only about 5-foot-7 and 140 pounds. The ‘Big’ was missing from the ‘Big Bad’ element that so many equated with hockey back then. Doing battle in front of the crease with leviathan defensemen, or outmuscling jumbo-sized forwards in the corners and on the boards, wasn’t going to be his path to the big time.

But you don’t need size to be a goalie. And as it happens, living across the street in Bob Ricci’s Fairlawn neighborhood were family friends with an older son who’d been a goalie in high school and was more than willing to help Bob learn the tricks of playing between the pipes.

They chalked off a goal on a wall in Bob’s cellar. The friend, by now a senior in college, fired tape-covered tennis balls at Bob, who’d yet to reach high school. As he did, he imparted lessons in posture, how to deflect shots, how to cut down a shooter’s angle. Not long afterward, the friend helped organize the Barrington Youth Hockey Association and would take Bob, dressed in his goalie gear, to practice at Brown’s Meehan Auditorium with the Pee Wees he was coaching.

Bob learned well. He played at Pawtucket West High School (now Shea) and averaged about 40 saves a game for the Rangers while earning All-Division honors as both a junior and a senior. After graduation he enrolled at Rhode Island Junior College (now CCRI) and continued his hockey career with the Tri-Valley Squires, a Massachusetts junior team owned by Stan Cherry.

It was here, through Stan Cherry, that Bob Ricci’s dream came true.

Saturday, November 26, 1977. Bob wasn’t playing hockey for the Squires, or anyone else, that day. He was cleaning the floor at the Smithfield Florist Shop, where he had a part-time job.

He was contacted by Cherry, who, in those pre-cell phone days, had to call the florist to reach him.

Cherry knew the owner of the Edmonton Oilers, then a member of the World Hockey Association. The WHA had been founded in 1972 as a competitor to the National Hockey League and made a huge splash by stealing some of the NHL’s biggest stars — Bobby Hull, Bernie Parent, Gerry Cheevers, Derek Sanderson, J.C. Tremblay, Ted Green — in its first year. The battle between the leagues had by ’77 become a war of attrition, which the NHL would end in ’79 by agreeing to accept four of the six remaining WHA teams (the Oilers, New England Whalers, Winnipeg Jets and Quebec Nordiques) into the league, but the WHA was still regarded as the second major North American hockey league on the day Cherry called Bob Ricci. The big time.

The Oilers were playing the Whalers that night in Hartford. They’d made a trade for a backup goalie but a snowstorm prevented him from getting to Connecticut. Edmonton needed a second goalie. Now.

The owner reached out to his friend Stan Cherry. Did he know of anyone?

He sure did. Someone who happened to be cleaning the floor at the Smithfield Florist Shop.

You may know the name Jayson Stark. He’s in the media wing of the Baseball Hall of Fame for his work covering the sport for The Athletic, ESPN, the Philadelphia Inquirer . . . and the Providence Journal.

In Providence, though, Jayson covered more than just baseball. He wrote about all sports.

And in the Wednesday, November 30, 1977 Evening Bulletin — the Journal’s afternoon newspaper at the time — Jayson Stark told Bob Ricci’s story to the world:

“When he got to the Hartford Civic Center, it began getting very difficult for Bob Ricci to believe what was happening, He walked into the locker room, and there were guys like Bill Flett, who once scored 43 goals for the Flyers, and Jerry Holland, who once scored 44 goals for the (Rhode Island) Reds, and Dave Dryden, who played his first NHL game in 1962. And they were on HIS team.

(The Oilers gave him uniform No. 1 and he joined his teammates on the ice for pregame warmups in front of 10,400 fans.)

” ‘I felt like a king,” said Ricci. “I’m on the ice with these guys, skating around, kids are asking me for my autograph. I signed a couple. I might not get the chance to ever sign anything again.” . . .

“At the other end of the ice, skating around just like Bob Ricci, was (the Whalers’) Gordie Howe, who scored 418 goals before Ricci was born. Much as Bob Ricci wanted to say something or shake the hand of your basic living legend, he didn’t. (“My dad got mad at me. He said I should have. But I was kind of nervous. I didn’t want to do something wrong.”) . . .

“But the best part was that everybody was so great to him. The guys on the team even told Dave Dryden that if he could just get through a period and a half, they’d be okay because then Bob Ricci could hold them the rest of the way.” 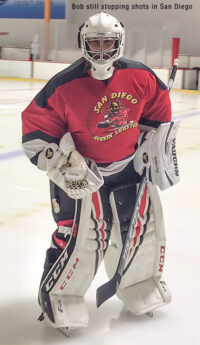 That would have been the fairytale ending to the dream. But, of course, it didn’t play out like that.

Bob Ricci didn’t get into the game, a 3-1 Edmonton victory. The only action he saw was in warmups, when, he told Jayson, his Oiler teammates for a night “scored some. In fact, after a while it looked like a coal bin behind me (what with all the black pucks piled up in the net).”

But it didn’t matter. For a night, Bob Ricci skated with the kings. He reached a level far beyond what most all the other Rhode Island — and New England — kids fantasized about while watching the snowy images on TV38 back in the day. Images that included, yes, Gordie Howe at a time when he was building the bulk of his Hall of Fame resume with the Detroit Red Wings.

It was something Bob mulled that night on the Edmonton bench.

“I was thinking,” he told Jayson. “What if I do get in the game and Gordie Howe scores his 1,000th goal on me? Then I’d go in the record books. It would have been nice.”