On Dec. 10th, 1955, it was a jubilee of sorts at St. George’s school in Middletown. The school’s Cabot Memorial Rink was surrounded rows deep with all ages straining for a glimpse of Tenley Albright, perhaps the most famous woman in American sports over the decade. 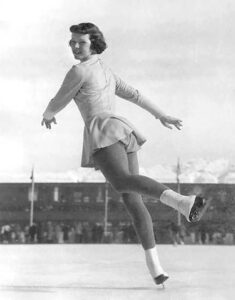 At the time of her appearance, the 20-year-old Albright had won the U.S. Skating Championship four times, was twice World Champion and had been the Silver medalist in the 1952 Winter Olympics in Oslo, Norway.

She was described as “a sight to behold.” Of her performance, the Newport Daily News reported, “As it was, her jumps and pirouettes were enough to make every youngster within seeing distance yearn to emulate the youthful champion.”

Opening the skating program was Eastern Men’s figure skating champion, Bradley Lord who would eventually go on to win the U.S. Nationals is 1961. Sadly, Lord was en route to the World Championships later that year, along with Dudley Richards (after whom the now distant East Providence ice rink was named) and the entire U.S. figure skating team, when the plane carrying them crashed near Brussels, Belgium, killing all on board.

Coach Lou Cimini’s LaSalle hockey team, dressed and eager to play an exhibition with St. George’s after the figure skating segment, had had a front row vantage point throughout Tenley Albright’s performance.

After the daughter of St. George’s hockey coach, Philip Cutler, presented the skating champion with a bouquet of flowers, she immediately skated to the boards where the LaSalle boys were hailing her. Among the team’s notables were Russ McCurdy, who would become the father of women’s hockey in New Hampshire, and Jack McGeough, who would go on to star at PC and play for the RI Reds.

Albright, enshrined in the National Women’s Hall of Fame, skated to the team to acknowledge the cheers and to say hello, tapping their gloves along the boards. The players were ecstatic – reveling in having touched the most famous and accomplished person they had ever met.