In 1926, the opening of the new RI Auditorium and the state’s first indoor ice surface heralded a bright new era for RI hockey.

Until then, hockey in the Ocean State was played on frozen ponds and rivers, subject to the whims of the weather. Now, indoor artificial ice generated an explosion of interest in the game. Among the institutions that saw opportunity was Providence College, which would suit up its first varsity hockey team that very year. It would be short lived.

The crush of demand for ice time at the new arena was overwhelming. Almost immediately, RI Reds, scholastic, and amateur league schedules, along with entertainment engagements of all varieties, quickly filled the Auditorium’s calendar. Lack of adequate game and practice time, as well as inadequate school funding, found the Friars squeezed out after a single season.

Twenty-five years would pass before a young man searching for the right classroom at the start of his freshman year at Providence College accidentally found himself in front of Father Herman D. Schneider, and Friar hockey fortunes would change forever.

That young freshman was Ray Farrell. This is his story. 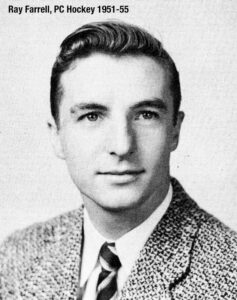 I often wondered was it fate or the daily prayers of Father Schneider and his undying wish to have a hockey team at PC that brought us together that day.

We finished the work at hand, but one of the nuns asked, “Would it be possible to repaint the cross at the top of the building?”

My father assured the nuns it would be no problem. “I’ll get my son to do it.”

That cross was more than 30 feet up. My dad hooked me up with a safety belt, a rope and a can of gold paint and up I went. As I painted, I would look down at all the nuns praying for my safety. When I finished and returned to the veranda the nuns came over to thank me, but one nun in particular asked my name and whether I was still in school.

I told her that I had just graduated from LaSalle Academy and was going to wait a year then enroll in the University of Rhode Island.

“Nonsense. You should go to PC,” she said, pointing to the school, which was in view from where we stood.

I said they were already in session.

She had a piece of paper in her hand when she returned. Written on that sheet was the name Father Fennell. She said, “He is waiting for you in Harkins Hall.”

I tried every excuse to get out of going.

“I’ll be waiting for Father Fennell’s call, so don’t disappoint me,” she said.

I walked into Harkins Hall and was awestruck by its grand appearance. Father Fennell met with me and asked if I had taken an entrance exam. I told him that I did at URI. He asked me if I wouldn’t mind taking another quick set. No, I said, but is that going to delay my start?

“No, I’ll work that out,” he said. I filled out some papers and took the exam. He reviewed it, smiled and said, “Let’s go get you some books.”

During that process he told me that I was going to take Business Administration Management, taught by Professor Gus Cote. My first class was the following morning. My head was spinning. I couldn’t believe what was happening and so fast.

The next morning I was able to find the business administration building and attended my first class with Mr. Cote, who was a big sports fan. My next class was French with George Reilly (I believe a relative of David Reilly, my former hockey teammate at LaSalle).

I had trouble locating the classroom. That’s when I frantically walked into a classroom that I thought was Mr. Reilly’s French class. Instead, it was a German language class. As I was asking other students if I was in the right place, I got a tap on my shoulder, and there stood Father Herman Schneider, the teacher.

I told him I was looking for Reilly’s French class. Kiddingly, he said why not take both?

“Where did you go to school?”

“Great hockey school. Did you play?”

“I wish we had a team here at the college.”

“You know, father, there are enough hockey players from LaSalle and other high schools actually attending PC that we could easily start a team.”

“Really? Meet me in the cafeteria at noon.”

At the meeting, I suggested that I would contact as many of the students from LaSalle and other schools to see if they had interest in starting a team. Most of the guys happily agreed. I told Father Schneider that there was plenty of interest, but what would the college do to support such a team? He had no idea, but would look into the possibilities and get back to me.

I knew that there was a new amateur hockey league starting at the RI Auditorium and we could get into it, if we acted quickly. I heard back from Father Schneider and he told me the best he could do was to supply the jerseys.

I learned through the conversations with some of the guys that the RI Reds were going to have new uniforms for the upcoming season and there might be a chance to get their old practice uniforms and some equipment. I went over to the Auditorium and met with their trainer, Mr. George Army, the father of fellow PC student Tom Army, the father of future PC All-American and Friar coach Tim Army and BC All-American Bill Army.

I asked George Army if there was any way that he could donate any of the jerseys and equipment that was going to be discarded. He told me that I would have to talk to Mr. Lou Pieri, owner of the team. He suggested I go to the front office and ask for him, which I did.

“I don’t know any Ray Farrell. What do you want?”

“I want you to help start a hockey team.”

“I already have a hockey team.”

“I know, but Providence College is trying to start a hockey program and I’m hoping you will donate your team’s old uniforms and some equipment to help us get started.”

“So, how much are you going to pay me for all this?” 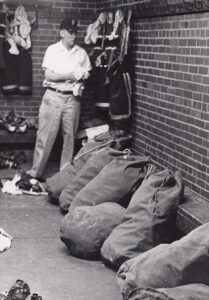 “We don’t have any money. Again, I was hoping you would donate it. I am willing to donate the PC team’s time to scrape the ice between periods and after each of the Reds’ games. In return, we’d also like for one or two hours of free ice time for our practice sessions. Is it a deal?”

“Yeah, I guess so. Go down stairs and see George.”

What a great man.

I backed up my father’s 1931 Model A Ford truck, and Mr. Army filled it with all the practice uniforms and pads, plus sticks and pucks. I returned to the PC campus with the loaded truck and headed for the house where Father Schneider and several of the other priests lived. I blew the horn (if you know anything about Model A Fords, you know the “Aroo-gah” sound that it makes). It brought Father Schneider out to the porch and I joyfully yelled out to him, “Father, WE HAVE A HOCKEY TEAM!” 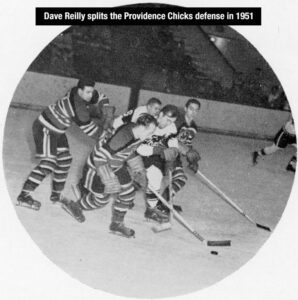 I was able, after a number of tries, to convince my former LaSalle hockey coach, Hall of Famer Lou Cimini, to coach us. He knew most of us, of course, and Lou was also a PC alum. He finally relented.

Our club team joined the RI Amateur Hockey Association and at our first game quite a few priests and professors were in the stands among the cheering students, including Father Slavin, the college president. It was so great being out on the ice and competing with friends Tom Army, Dave Reilly, Bob Petit, Howie McGuiness, and so many more.

It was a very successful season. We had quickly assembled a team that finished with an 8-2-2 record, tying for the regular season title. With Tom Army leading the league in scoring, it validated the depth of talent we had and the promise of more success at the varsity level.

Without his pledge of unwavering support, there was no greater moment, I’m sure, for Father Schneider, the undisputed founding father of PC hockey. It must have been glorious for him to see that first puck dropped and a team wearing jerseys with Friars emblazoned across the chest playing at the RI Auditorium for the first time in so many years. The success we enjoyed was the cherry on top. 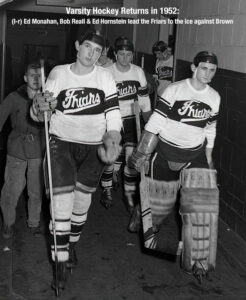 It was his dream, his passion, his prayer that someday it would become a reality, and here it was.

The following season, 26 after their first and only – and with much of our club team serving as the nucleus – Providence College suited up a varsity team once again. It was 1952 and our first game was against cross-town rival Brown. Incredibly, just a short dozen years later our Friars would be playing for a national title for the first time at the Final Four in Colorado Springs and winning it all in the Frozen Four in 2015.

It was Father Schneider’s dream came true…and I was so proud to be there when it all started.

Ray Farrell, class of 1955 and a proud member of the hockey team. 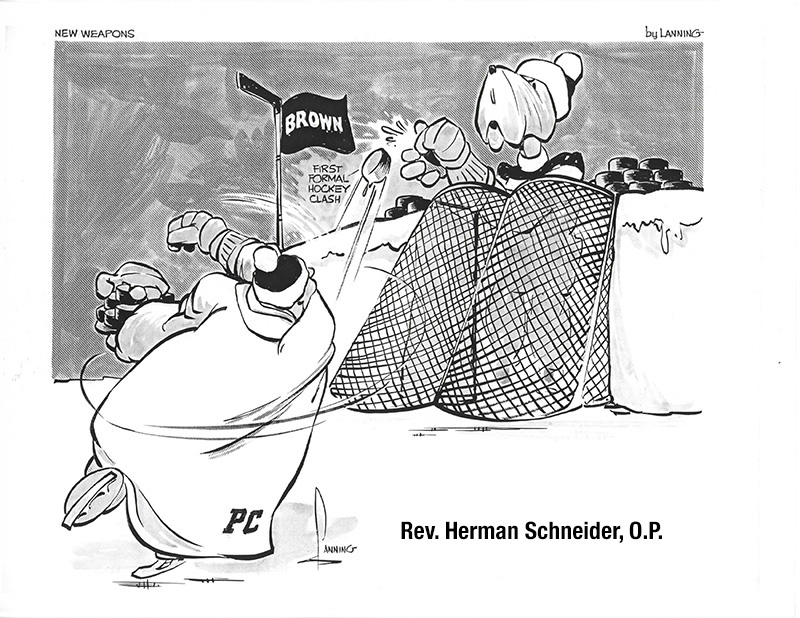