Bishop Hendricken’s future Hobey Baker Award winner, David Emma, made it to the NHL in 1993, the same year as Steven King, one of the stars of the Providence Bruins’ Calder Cup run in 1999. But there was another Hawk who made it to the big show well before both and few know his name.

Sometimes, good things just fall into our laps. Such was the case for the fledgling Bishop Hendricken hockey program for its 1975-76 season. 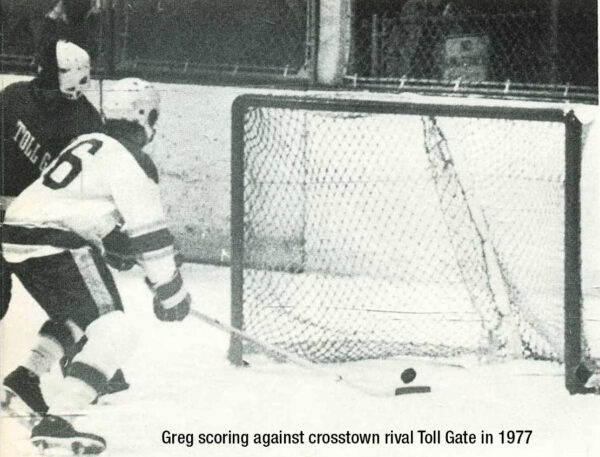 Hendricken has now long been a RI schoolboy hockey power but that wasn’t always so, because everybody has to start somewhere. Just two years removed from the formation of a club team and one year under their belts in the Suburban Division of the RI Interscholastic League, Hawks’ head coach Roger Guillemette got a call from the school’s front office.

“I have some good news for you, coach,” he was told. “A new student has just been enrolled. We’ve been told he’s an exceptional hockey player.” Always on the lookout for new talent, Coach Guillemette was excited about the prospect.

He was truly that ‘new kid in town’. He had had just moved into the area from out of state – his family uprooted when his dad was transferred to Rhode Island to take on a new administrative position with Eastern Airlines.

The first day he stepped onto the ice, his coaches could see that he was all that he was billed to be. “Even so young, you could just tell he had the goods,” Roger recalled. Assistant Don Armstrong agreed.

His name was Gregory Britz. Born in Buffalo, NY, he would bounce around with the family’s moves but spent most of his youth growing up in Marblehead, MA. But now he was here at Hendricken, a high school just getting geared up to spar with the big boys and decades away from its seven state titles. Blessed with a fine, yet still young cast of local area talent, Greg could make a difference in this up-and-coming squad. And that he did.The 1975-76 season showed great promise despite the team’s inexperience.

With Greg now one of the team’s leaders and a consistent threat to the opposition, Hendricken made the jump from the Suburban to the state’s Met A Division for the 1976-77 campaign. The team’s play continued to improve throughout the new season against the better competition. Then, as quickly as fortunes had improved with Greg’s arrival, he was gone – the family on the move again.

Greg finished his prep play at St. Michael’s College School in Toronto. His next stop was the Ivy League and Harvard where he starred with the Crimson over his four years in Cambridge.

His connections to RI were renewed during that period playing in familiar territory against former foe now skating with the Brown and Providence College programs. In his sophomore season, he played a key role in upsetting the defending ECAC champion Friars here at Schneider Arena. He would go on to have his best collegiate season as a senior, notching 16 goals and 23 assists from his right wing position. 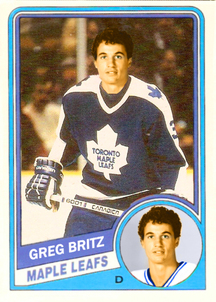 Undrafted, Greg signed a pro contract with the St. Catherines Saints of the American Hockey League in the fall of 1983. The Saints were the farm club of the Toronto Maple Leafs. He scored 23 goals and 39 points, his strong two-way play catching the eye of the Leafs, who called him up for six games to fill in for injured players. Greg had made it to the NHL, the first Hawk to reach the highest level of the game – ten years before Emma and King. 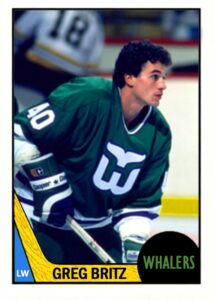 In 1986, Britz joined the AHL’s Binghamton Whalers, the farm team of the Hartford Whalers where he lit the lamp for 25 goals and 41 points in 74 games. Again, his sterling play led to a call up to the parent club. He would play his final NHL game with the Hartford Whalers.

Earning a BA from Harvard University and then a Juris Doctorate degree from Northeastern University School of Law, Greg began a new career in the prestigious Boston law firm of Palmer & Dodge. Dedicated to service, he provided pro-bono legal assistance to vulnerable populations and served on the Boards of several organizations.

Today, Greg, who now lives in North Carolina, is the associate director for operations and finance at the Center for Documentary Studies (CDS) at Duke University where he has worked for the past twenty-two years. And, by the way, he still skates in adult leagues, where we are sure he remains a scoring threat whenever he takes to the ice.