We call them “hockey” rinks because, well, we play hockey. They’re really “ice” rinks, a playground for all sorts of recreation, not the least of which is figure skating, which most certainly preceded hockey as a recreational pastime.

Patricia and Betty Ann Farrell grew up on figure skates. Their father, the late Dr. Charles Farrell, was the founding President of the Providence Figure Skating Club, organized in 1938 and based at the RI Auditorium. Patricia, known as Patsy in her competitive skating days, would go on to become a longtime instructor for the club and, as history would attest, perhaps its most ardent supporter.

With the opening of Brown’s Meehan Auditorium in the early 60’s, the club began renting ice time at the new rink, gradually parting ways with the aging arena at 1111 North Main. By the mid-sixties, the club was advised that the needs of the university would severely reduce their available ice time. Patricia knew something had to be done and her husband, Robert Zeiser, wasn’t going to let her down. 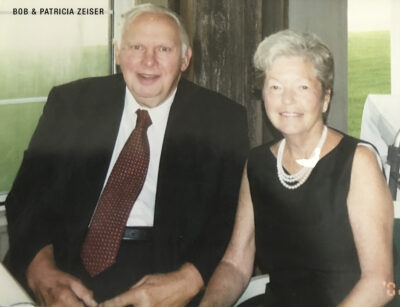 Bob, who never skated, along with Patricia devised a simple plan – build the club its own skating rink – right near their home in Rumford. Bob used his considerable influence and persuasive skills to summon the financial support of friends and some of the local area’s most notable residents and social organizations such as the Rumford Lions and members of the Wannamoisett Country Club.

Twenty-six equal shareholders, the majority of them East Providence and Barrington businessmen with a family background in hockey, formed the privately owned entity, Skating Enterprises, Inc., with Bob Zeiser as its president. They immediately began the process of purchasing a site on New Road in Rumford and designing the rink, which was built at a cost of $600,000 with a mortgage of $450,000. 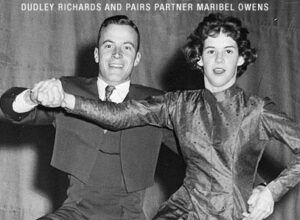 One of those investors was Rumford neighbor Ross Richards, brother of Dudley S. “Dud” Richards, the former US National Pairs Champion and 1960 Olympic figure skater. The product of the Skating Club of Boston, Dudley Richards tragically perished in 1961 along with the entire US figure skating team that he captained when their plane crashed in Belgium en route to Prague for the World Championships.

A year later, Ross established the skating club’s Dudley Shaw Richards Memorial Award for aspiring figure skating champions. The 1963 recipient was 11-year-old Anne Marie Venditti, the New England juvenile singles champion who developed her talents at Iceland, another of our region’s lost arenas, which was an outdoor rink engineered and built by her father, Anthony Venditti, in the 1950’s in the parking lot of his stock car Speedway on Fall River Avenue in nearby Seekonk. 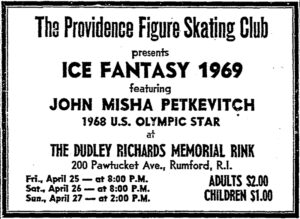 While Dudley Richards Arena opened to the public in mid-February, 1969, Bob and Patricia Zeiser’s dream came to full fruition on April 25th. That was the occasion of the Providence Skating Club’s annual “Ice Fantasy” show, which happened to be the club’s 30th annual spectacular. This first official event to be staged on the 187’ x 85’ ice surface featured a “magical exhibition performance” by John Misha Petkevich, the 1968 Olympian and reigning US Singles Champion out of Harvard, Dudley’s alma mater.

One month later, on May 28th, the Dudley S. Richards Memorial Ice Skating Rink was formally dedicated to an overflow SRO gathering at the 1,200-seat arena with an estimated 300 more clamoring outside. The keynote speaker was Senator Ted Kennedy, a childhood friend of the Richards family on the beaches of Hyannis and Dudley Richards’ roommate at Harvard. He described the rink as a “fitting tribute to a man who really manifested the kind of character we like to see in young America.”

According to the figure skaters who flocked there, the rink made excellent “figure skating ice”, not surprising since the rink was originally conceived as a surface for figure skating. It differed from hockey ice in that it was purposely “softer” so that it could hold the blade edges and figures better. Hockey ice tended to be harder and would chop up because it was more brittle.

It was announced during the dedication that the privately owned rink would be open to the public at certain hours according to arrangements made with the East Providence Board of Recreation. This was the beginning of the Bobby Orr era and, as it was doing in other towns throughout New England, hockey was about to take center stage in Rumford.

East Providence and Pawtucket jumped on the bandwagon, each community purchasing skating time. According the Bob Zeiser, “Pawtucket came to us first with a big budget. They spent five times as much as East Providence.”

While East Providence had been playing high school hockey uninterrupted since Rhode Island first organized a schoolboy league in 1902, there was never an organized youth hockey program in the town. If you wanted to learn how to skate or play organized hockey as a youngster, you went elsewhere. Now, for East Providence and a good chunk of the East Bay, there was a new rink nearby. Enter East Providence’s Tom Army, former PC Friar team captain and son of legendary RI Reds’ trainer, George Army.

Tom’s three sons, Tom, Jr., Billy, and Tim, were mainstay talents in Cranston’s highly-regarded Edgewood Youth Hockey program. With the considerable help of others, Tom set out to establish the East Providence Hockey Association, starting with a nucleus of Townie talent drawn back home from other statewide programs. The brothers Army headed the list. 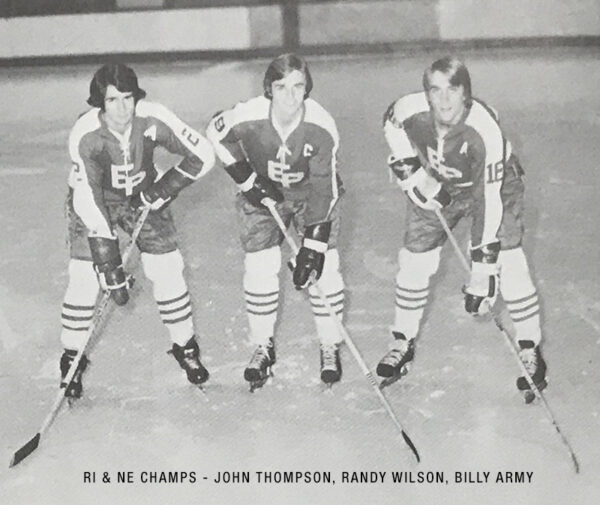 Soon thereafter, AHL Hall of Famer, Larry Wilson, was hired to coach the RI Reds and settled his family, including sons Ron, Brad, Randy and Dale, in Riverside. Suddenly, what would become two of the most famous hockey families in Rhode Island and New England history were together in the same school. Townie hockey exploded. Dudley Richards Arena would also eventually become the home rink of the Barrington High School and Providence Country Day hockey teams.

The big beneficiary, however, was the Townies. Instantly brimming with future pro talent on top of an already skilled and experience roster and with the new rink on their doorstep, they immediately challenged the state’s perennial powers for interscholastic supremacy. High school hockey in East Providence became a statewide draw and crowds reported at over 1,400 were a common occurrence with the Army’s and Wilson’s in uniform. In 1975, they captured both the RI state and New England titles.

Meanwhile, the town’s youth hockey program was booming, boasting over 700 players over all divisions. The rink and the EPHA were also garnering a reputation beyond our borders thanks to one of the nation’s most famous automotive brands.

The FRAM Invitationals were sponsored by the company’s engineering and research facility which was located a stone’s throw from the rink. The tourneys were championed by many on the company’s executive board and workforce, who lived nearby and whose family members played hockey or figure skated at Dudley Richards. The annual tournaments attracted teams from throughout the east coast and Canada with dozens of local families opening up their homes to host the visiting youngsters.

Rink manager, Ed Woodcock, a former star player-of-the-year at Hope High School, had long been involved with the Figure Skating Club. In addition to his considerable hockey talents, he was also a skilled figure skater. He often orchestrating figure skating sessions at the Auditorium and at Meehan and was a natural choice to run the new rink.

Along with his younger brother, Rollie, who he recruited to run the rink’s famous skate shop, the two had the arena humming. Both had learned their lessons well while working with older brother, Tom, at the RI Auditorium. At the skate shop, skaters would often line up out the door waiting their turn for Rollie to shape the perfect edge on their hockey blades or for Ed to precision sharpen the figure skates with the special hollow grind they required.

On the artistic and recreational side of the rink’s patronage, membership in the Providence Figure Skating Club was expanding and Friday nights turned into “Kid’s Nights”, with hundreds attending public skating sessions. The Reds would sometimes schedule a practice when shows like Ice Capades were in town, drawing the locals for a free glimpse at the pros. The rink also gave birth to one of USA Hockey’s most influential nationwide figures. It was the adult league games that drew Larry Reid and his son, who lived just around the corner, to the game of hockey.

“When Jeffrey started to play, parents were expected to help,” recalls Reid, so help he did. Before long, Larry was running the house league, eventually becoming president of the EPHA. Not too many years later he was taking on high-profile responsibilities for USA Hockey and helping to set policy for all youth hockey across the country. The highlight of his 46-year career with USA Hockey was serving as the team leader for men’s and women’s national teams representing our country in World Championships and the Olympics.

The bright lights that shone on the figure skating and hockey fortunes of the early to mid-seventies began to dim in 1976. Skyrocketing expenses brought on by an energy crisis put the rink’s future in peril. Ownership did not renew its arrangement with the high school and interscholastic league because it found it was losing money reserving too many discounted hours and nights for them. While they would return to the rink the following year thanks to a loan guarantee from the state’s Recreational Building Authority, the “home teams” had no home at Dudley Richards in 1976.

But expenses continued to rise. The ownership was near default on its state-guaranteed mortgage and time had run out. The state took control of the rink in May of 1978. In November, the City of Pawtucket leased Dudley Richards while repairs were being made at their Lynch Arena, which had been damaged by fire. During that period, the rink also became the “home ice” for the Tolman and Shea High School hockey teams.

Attempts to sell the rink failed, including an offer to the City of East Providence to purchase it for $500,000 but no serious negotiations ever developed despite the pleas of residents at town council meetings. Meanwhile, the EPHA put their hat into the ring to purchase the rink, but could not come to affordable terms.

In July of 1979, ten years after it opened and changed the hockey landscape on the east bay, the Dudley S.  Richards Memorial Ice Rink was sold to United Skates of America, the largest roller-skating rink operator in the country, for a reported sale price “in excess of $400,000”.

The Providence Figure Skating Club moved their sessions to Mid-State Arena in East Greenwich and then to the Smithfield and Cranston municipal rinks when Dudley Richards closed. It is still active and thriving today, operating as the Pawtucket & Providence Figure Skating Club and rotating sessions at PC’s Schneider Arena, Pawtucket’s Lynch Arena, and the Smithfield Municipal Rink. 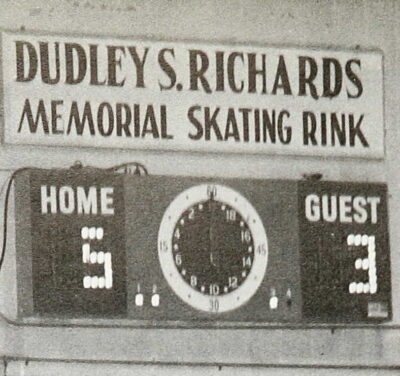 The loss of Dudley Richards has had a more profound effect on the high school. After the rink closed, the Townies took up residence at Mid-State Arena in East Greenwich. That was short lived for both the high school and the skating club as Mid-State was soon to succumb to the energy crisis that doomed Dudley Richards. So on the Townies moved to Lynch Arena. And while they would continue to rack up divisional titles under very capable coaching over the following years, the lack of a local rink and other recreational diversions eventually resulted in fewer and fewer local youngsters showing an interest in the game.

Today, 118 years after recording the school’s first interscholastic league victory and 40 years after the loss of the Dudley Richards Arena, East Providence High School competes as a co-op squad, unable to suit up an entire team from its student body.

How times have changed. Hopefully, they will change again, this time for the better and new generations will discover the joys of playing this wonderful game.