Colby Cave: Remembering a Talented Young Man Who Loved and Respected the Game

Colby Cave was one of those rare players.

His infectious smile, attitude and work ethic were second to none and everyone around him fed off his energy. The news of his recent passing at the age of 25 shocked the hockey world. Cave had been placed in a medical induced coma before he had surgery to remove a colloid cyst in his brain that was causing bleeding. He died on April 11.

After his junior career with the Swift Current Broncos of the Western Hockey League, the Boston Bruins signed the centerman as an undrafted free agent and assigned him to Providence of the AHL. Cave’s talents were raw, but he possessed an unwavering work ethic and desire to reach the NHL.

Cave spent parts of five seasons in the Bruins organization and played the majority of his career in Providence. He became a fan favorite for his relentless, two-way style of play and was well connected with his work in the community.

“There’s no one better than Colby Cave with regards to being a person and the way he treats other people,” P-Bruins coach Jay Leach told The Athletic. “He was a terrific part of our organization. As a coach, you can’t help but love players like Colby. He treated his teammates like gold and there wasn’t a guy in that locker room who didn’t relate and love Colby as a teammate in Providence.”

Whether it was at the amateur or pro level, Cave gained the respect and admiration of his teammates. He played with Jake DeBrusk in junior with Swift Current, and again as pros in Providence and Boston.

“I was lucky to play junior hockey with Colby. He was our captain and leader. It was an unforgettable moment when we again played together in the NHL for the Boston Bruins. He was an amazing person, player and friend.” 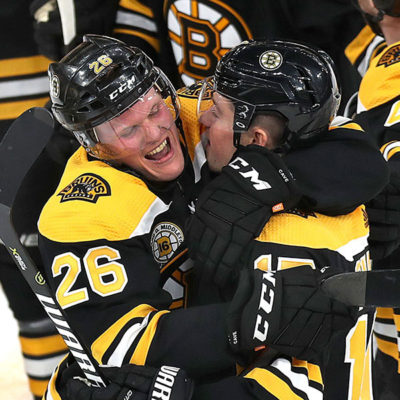 Cave accomplished his goal and made his NHL debut with the Bruins on Dec. 21, 2017 against the Winnipeg Jets at TD Garden. When he arrived in Boston that afternoon as an emergency call up, he was carrying his P-Bruins bag and sporting a massive smile when he walked into the locker room.

Bruins coach Bruce Cassidy was thrilled to put Cave in the lineup. The two worked together when Cassidy was still coaching the P-Bruins in 2015-16. It didn’t take long for Cassidy to realize Cave’s willingness to improve as a hockey player.

Cassidy described Cave as a likeable guy and a player who was hard not to like. Bruins general manager Don Sweeney said Cave had similar characteristics as Patrice Bergeron both on and off the ice.

“Driven and committed to be an NHL player,” Sweeney said in a statement. “Colby was also uniquely unselfish with his own NHL dream, helping his teammates and his coaches, game-by-game and day-by-day.”

Bergeron knew Cave as a “tremendous young man with passion, dedication and respect for the game of hockey. Beyond that he was genuine, respectful and always full of life. I’m glad our paths crossed and I had a chance to get to know him.”

When the Bruins placed Cave on waivers with the intention of returning to the P-Bruins, the Edmonton Oilers jumped at the chance to claim him on Jan. 15, 2019.

“Colby was a solid player, beloved teammate, but more importantly a truly special person,” Cassidy said. “He will be missed but never forgotten. Our thoughts and condolences go out to Emily, her family and the Cave family.”

On April 13, Cave’s hometown of North Battleford, Saskatchewan honored its native son with a motorcade of first responders along highway 16. Hundreds of cars lined the roadside as the vehicles passed. It was a nice tribute for the type of person everyone liked and respected.