Art Lesieur is a Providence Reds and Rhode Island hockey legend. With his skillful, imposing blueline play and his rights owned by the Montreal Canadiens, local fans and opposing players, alike, assumed he was Canadian. To the contrary, he was born and raised just 20 miles away in nearby Fall River, MA on September 13, 1907.

In an era when U.S.-born players were few and far between, he would go on to become the imposing physical presence and emotional leader of one of the first dynasties in all of professional hockey.

Art’s hockey journey began at age 13 when he was sent to Saint-Cesaire in Quebec to finish his education in a boarding academy run by the Brothers of the Holy Ghost. There, he took up hockey, tending goal because he was a poor skater. When his skating improved, he was moved to defense. After graduation, he found work back home at a Providence paper company. He was discovered sweeping RI Auditorium ice and playing center in the local Inter-City League by Jimmy Gardner and Jean Dubuc, the coach and general manager of the Canadian-American League’s Providence Reds, then the farm club of the Montreal Canadiens.

Art was invited to work out with the Reds and was given a job sharpening skates at the Auditorium while he progressed as a player. In 1927, the team found a spot for Art with the Nashua (NH) Nationals of the New England Hockey League, an all-outdoor circuit. At season’s end, his play earned him a suit up with the Reds for a single game. His size and outstanding performance that day against top talent validated Lesieur’s promise as a player and prompted the Canadiens to sign him to a free-agent contract. 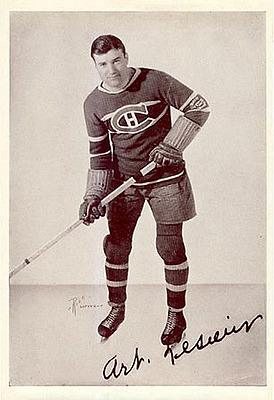 The 20-year-old Lesieur opened the 1928-29 campaign with Montreal before being loaned to the Chicago Blackhawks and then being assigned back to Providence, where he played with a tenacity and defensive skill set that would be the trademarks of his exceptional career.

His 1929-30 season with Providence would result in the first of 6 league (C-AHL, IAHL & NHL) championships he would experience over the decade. A year later and now back with the Canadiens, his sterling defensive play helped Montreal capture the 1931 NHL title, the club’s fourth. In doing so, Art became the first U.S-born Canadiens’ player (and fourth U.S.-born in all of Stanley Cup history) to have his name engraved on the revered vessel.

Over his career with Providence, Art skated, captained, coached and played key roles on a team that was easily one of the top ten hockey teams in the world. He played on more championship teams than anyone in the team’s history, contributing to Fontaine Cup titles as a player in 1930, 1932 & 1934, and Calder Cup titles in 1938 & 1940 while earning multiple All-Star nods along the way.

Over those many years and the many dozens of teammates he played alongside, only seven others were U.S born, the most notable being Frank Brimsek, Mike Karakas and Hago Harrington – all US Hockey Hall of Famers – whose combined 6 rings over their entire careers were equaled by Lesieur in a single decade alone.

Art reveled in being the team leader on the league’s stingiest defense. As team captain and often the biggest man on the ice, he became the target of the majority of boos from opposing fans – the mark of begrudging recognition for his bruising hits and his importance to the Reds dynasty.

Art was certainly among the early players who helped forge hockey’s reputation as the one sport where injury took a back seat to staying on the ice. Known as “gamer” his entire career, Art was virtually impossible to keep out of the lineup. One season, he played for a time through the pain of two broken ribs only to sustain a third several games after. 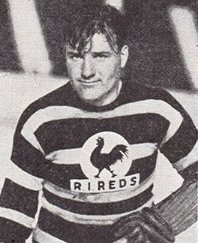 In the 1938 league championship series, he played four games with his left eyelid stitched and his eye completely closed. The Reds captured the title. Earlier in his career, due to team injuries, he played the full 60 minutes in three consecutive games.

Over his thirteen campaigns with Providence and Montreal (1927-1940), the heady, steady defenseman scored 43 goals and 56 assists in 522 games, while amassing 551 minutes in penalties. In 1963, he was inducted as a charter member of the Reds’ Hall of Fame.

During the 1938-39 season, Lesieur negotiated a hat trick of duties playing for the Reds and coaching both Brown and MSC. He would later say, “There is a wallop in working with the young fellows and seeing them come along. That’s my line.”

In 1937, Art purchased his own skate-sharpening machine and took on the added responsibility of sharpening blades to the specifications of all of his teammates. The multi-tasking Lesieur was also a man of multi talents, finding time to become one of Rhode Island’s best municipal golfers over the years. He was also an accomplished cyclist, often serving as the pace bicycle for professional races, a practice his Montreal GM, Leo Dandurand, demanded he abandon for safety reasons, which he did.

In 1941, just days after the attack on Pearl Harbor and midway through the season, Art became a national celebrity as the first U.S.-born professional hockey player to be drafted into the armed forces, turning in his team colors for Army drab. He served nearly five years, of which 32 months were in combat overseas commanding artillery batteries in both the European and North African theaters. Art returned to the game as player/coach and scout for the Minneapolis Millers of the USHL and, finally, as head coach of the Reds for the 1946-47 AHL season.

Following his playing and coaching career, the longtime Warwick, RI resident returned to RI Auditorium ice refereeing high school and college games, as well as serving well over a decade as a linesman for all Reds’ AHL home games.

Few in the stands or even playing in the games were aware that the burly man gracefully racing from end to end, blowing his whistle and breaking up tussles was, perhaps, the most accomplished and decorated skater on the ice.

In 1963, Art was inducted into the charter class of the RI Reds Hall of Fame. Four years later, Art sadly passed away at the age of 60. He and his wife, Maxine (Faubert), are laid to rest at St. Ann Cemetery in Cranston, RI.