A History of #EBUG (Emergency Back Up Goalie) in Providence

If you’re a hockey fan, odds are overwhelming that you’ve heard the story about David Ayres and #EBUG:

And a great story it is.

However, it’s one we’ve heard in these parts before. 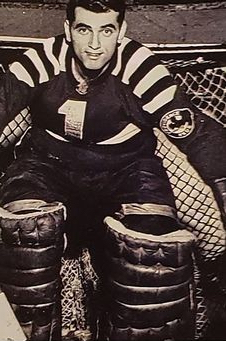 You’d have to have seen a few faceoffs to remember this one. 20-year-old George Dermksian, who played goal for Central High School — which hasn’t had a team in nearly 40 years — got the emergency call twice during Providence Reds’ games at the Rhode Island Auditorium in the 1950s . . . for the opposition.

In 1955, he played most of the third period for the old Pittsburgh Hornets after goalie Gil Mayer was hit in the nose by a shot and had to leave the game. Two seasons later, he was called from his seat down to the ice to relieve Mayer again after the veteran goalie, by now playing for Hershey, sprained an ankle in the first period. Dermksian, whose nickname was “Shoe,” tended goal for the last 55 minutes or so and made 26 saves as the Bears eked out a 6-5 win over the Reds.

(Interestingly, Jerry Toppazzini, brother of Reds’ icon, Zellio, was the last position player in the NHL to fill the void in the nets when he did so with the Boston Bruins for the last 30 seconds of a 1960 game against the Blackhawks.)

You may, however, recall something more recent. From Mark Divver…

Providence Bruins had an EBUG moment in their 1st season, 1992-93. Providence fireman. @Rgribby35 kicked out 2 shots in 8 minutes during a game at The Dunk

Mark didn’t have to remind me. I was there:

At that moment, after the Adirondack Red Wings had pumped the seventh goal of the night past Providence Bruins goaltender Mike Bales, coach Mike O’Connell turned to Rob Gribbin and said, “Gribby, you’re going in.”

And the final chapter of the fairy tale was written. Gribbin, the Providence firefighter signed by the P-Bruins last Friday to be their emergency backup goalie, entered his first professional hockey game.

It was Sunday night, January 10, 1993. The goaltending situation in the Bruins’ organization was in disarray after, in quick order, the B’s placed end-of-the-line backup Reggie Lemelin on waivers and starter Andy Moog came down with a back ailment. They called up Providence’s John Blue as Lemelin’s replacement but until Lemelin cleared waivers and subsequently decided if he wanted to accept a demotion to Providence (spoiler alert: he didn’t), they couldn’t make another move. They were thus in a short-term situation where they would summon Bales, the P-Bruins’ other goalie, to Boston to serve as Blue’s backup in Moog’s absence, and then send him back to the Dunk (known at the time by its maiden name, the Civic Center) to start for Providence.

The strange arrangement worked only because of a serendipitous schedule — another plan would have been needed had the Bruins not been in the midst of a six-game homestand, or had the P-Bruins been away from Rhode Island in one of the outer reaches of the AHL, or had the teams been scheduled to play on the same night — and because it was just a matter of a few days before the waivers expired. Still, for 72 hours or so, Providence had a goaltending dilemma. 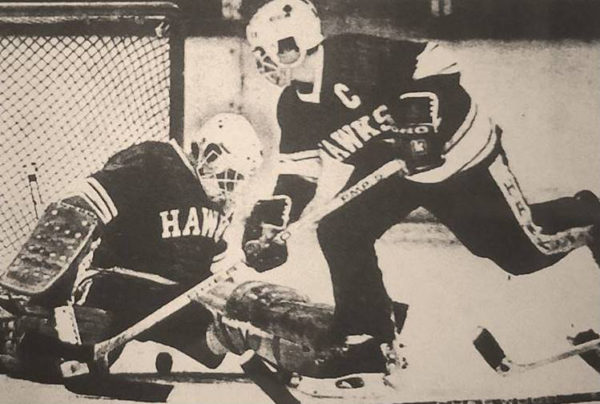 In stepped Rob Gribbin, then — and now — a Providence firefighter.

Gribbin had been a second-team All-State goalie while at Hendricken in the mid-1980s, and continued to play in amateur leagues after joining the Providence Fire Department. The P-Bruins got word of him — according to rink lore, his fire-house compatriots contacted the team — and gave him a tryout. He obviously passed, as they signed him on Friday, January 8, and he was Bales’ backup that night at the Civic Center in a 2-1 loss to the St. John’s Maple Leafs. The team was off Saturday, then played Adirondack on Sunday.

By then, the drama was about played out. Lemelin had to make his decision by Monday, which would untie the Bruins’ hands and allow them to send either Lemelin or one of the other pro goalies they had under contract to Providence. Though Gribbin would say after the game that he wasn’t sure how it would end (“They told me to keep coming [to practice] until they tell me not to”), it was widely assumed Sunday night would be his P-Bruins swan song.

So when the Red Wings made the score 7-3, O’Connell decided to give Gribbin the memory of a lifetime.

Gribbin — who was given a standing ovation by the 9,000-plus fans in attendance –played the final eight minutes and two seconds, his mask painted fire-engine red rather than the customary Bruins black-and-goal. He was forced to make only two saves: a bouncing clearing pass from center ice with 5 1/2 minutes to go, and a hard shot from the left slot by Adirondack sniper Vyacheslav Kozlov that Gribbin stopped with his right shoulder with 1:36 left.

(Yes, that’s the same Slava Kozlov who would go on to score 356 goals in the NHL.)

The crowd roared after that save and, prompted by the scoreboard, began chanting, “Gribb! Gribb!” Those still around at game’s end gave him another standing ovation as he headed off the ice.

“I wanted to get him in a game,” O’Connell said afterwards. “It might be his last chance. There’s some heart in hockey, too, you know.”

Unlike Shoe, Gribbin wasn’t technically an #EBUG; Providence didn’t pull him out of the stands and put him in the game. But he fit the description by the spirit, if not the letter, of the law

Gribby’s still a firefighter and still active in the hockey ranks. He, too, was thrilled for Ayres:

That’s so awesome for Ayres! Best part is he got the win! Congrats David! #EBUG

For Gribbin that was the best part, too. Consider what he told me, and the rest of the media scrum, after his night in the spotlight:

“It was exciting and not so exciting. We were getting blown out of the building . . . I’ve always been a team player and I don’t like to lose. And we lost.”

They lost a game, maybe. But the memory of that loss — and Shoe’s win, for that matter — has long since faded. Not so the memories of Rob Gribbin’s and George Dermksian’s moments in the sun.