The 40th anniversary of what might be the greatest upset in sports history – the United States’ victory over the Soviet Union’s thought-to-be-invincible hockey team in the 1980 Winter Olympics – just passed, and the memories came flowing back as one news outlet after another reached into its vaults and resurrected moments of what has come to be known as the Miracle On Ice.

(One of the best written pieces is here — https://www.bostonglobe.com/sports/2020/02/18/reflections-covering-miracle-lake-placid-years-ago/PDUNKKbjFvvqKerDCr6BMO/story.html — by John Powers of the Boston Globe. If 1980 was a little before your time and you’re wondering what the big deal was, click the link. John will tell you.)

Personally, I was at Schneider Arena that night for a PC-UNH game and heard the result from a fellow Providence Journal writer just before the Friars and Wildcats faced off. (Another factoid that may be incomprehensible to modern audiences: The Olympic game wasn’t broadcast live. The television networks didn’t yet have the muscle to force the scheduling of big events at a time of maximum American audience reach, so puck drop was at 5 p.m. Eastern, in order that it wouldn’t be aired in the middle of the night in Europe and Western Asia. ABC taped it, did all it could to keep the result a secret, and put it on at 8 p.m.) The Journal reporter called the office, found out the score and passed the word around Schneider. The result was announced over the P.A. as the teams were lined up for the national anthem and the place erupted. The fans went wild, with players from both teams happily pounding their sticks on the ice. It was a moment of national pride for a country that — in the wake of rising unemployment, crushing inflation, and international humiliation in the Iranian hostage crisis – sorely needed a boost.

And when the U.S. won the gold by beating Finland two days later – with, again, the game being played at a non-prime-time hour, 11 a.m. on a Sunday (though it WAS televised in the moment) – the perfect ending for a story of the ages was written.

At which point everyone everywhere began searching for a local hook, something that would allow them to latch onto our biggest feel-good story since . . . when? The moon landing in 1969?  But there were damn few. The players and coaches came from two clusters – the upper Midwest and Boston University – and if you had no connection to either, you were out of luck.

But Rhode Island, as it turns out, has one.

“Oh, it was special,” William Gilbane Jr., current vice-chairman of the 150-year-old Gilbane Building Company, remembers about that time.

It was Providence-based Gilbane that built all the Olympic facilities at Lake Placid, N.Y., the site of the ’80 Winter Games. Included in that project was construction of what is now known as the Herb Brooks Arena, which hosted the U.S.-USSR game and was subsequently named for the coach of the American team after his tragic death in a car accident in 2005.

The Gilbane family, of course, has a long history of Rhode Island sports achievement.

“[It goes] back to my dad and uncle,” said Bill Gilbane, referring to his father, William J. Gilbane, and his uncle, Thomas F. Gilbane, who in the 1930s began running the company started by their family. “They were All-American football players at Brown in 1932. Their team came within one game of going to the Rose Bowl. For years they were considered — other than the Iron Men (who, in 1926, authored the school’s only undefeated season) — the top team in Brown’s history.”

Hockey is another sport in which the Gilbanes excelled: Bill Gilbane played three seasons, from 1967-70, at Brown under legendary coach Jim Fullerton, and one of his teammates for two years was his cousin Bob, also a three-year letterman. In addition, Gilbane played with, and was a roommate of, R.I. Hockey Hall of Famer Curt Bennett at school, and was Bennett’s on-stage presenter during Bennett’s induction into the Hall in 2018.

The Providence-based Gilbane Company – an industry leader with more than 45 office locations around the world – has, as part of its vast portfolio, worked on dozens of sports and entertainment projects over the years. Among them: Construction of Brown’s Meehan Auditorium and URI’s Boss Arena, and the renovations of the Dunkin’ Donuts Center . . . three of the four biggest hockey venues in the state. Click here — https://www.gilbaneco.com/projects/overview/?market=sports – for a list of some of their other sports/entertainment work. It’s impressive.

Few, however, will resonate in history like Lake Placid, if only for what unfolded in one of the buildings they put up.

“I was in a lower project-management level [at the time] and not involved in that job itself, but very much aware of it,” said Bill Gilbane. “My dad was the lead for our company going up there. He used to fly up on a little private plane . . . because it’s quite a drive.

“And a couple of wonderful Rhode Island builders, Gilbane builders, were up there . . . Joe Pezzullo and Bob Manocchia, who were with Gilbane for, well, Bob for 50 years and Joe in the 40s. Joe was the superintendent and Bob was the project executive.

“That’s kind of the thrill of some of the stuff we get to do, where Rhode Island people participate in these amazing jobs.”

Work began on April 21, 1977, nearly three years before the Games got underway. There were actually 14 separate projects over a 20-mile area – for housing, various arenas, ski jumps, luge run, a speed-skating rink in addition to the hockey facility, a press center – and it was all completed on time. “That could not have been accomplished without the very capable skills and the work that Gilbane Building Company put into Lake Placid in many different facets that they were challenged to do,” said Lake Placid Mayor Craig Randall. 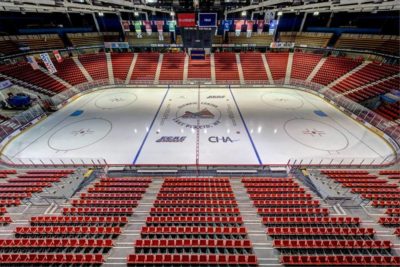 And unlike many other Olympic venues, the buildings didn’t sit empty and rotting once the Games were over. Herb Brooks Arena, for example, is the yearly home of the ECAC Hockey Championships and also hosts USA Hockey events, in addition to ice-skating and entertainment shows. And Lake Placid continues to use (and upgrade) the sites . . . with the continued help of the Gilbane Company. “We’re rehabbing the facilities up there now,” said Bill Gilbane.

Because understand: This was akin to Plymouth State’s football team going into Gillette Stadium and beating the Patriots. The Soviet team, as aptly described on the Wikipedia page (https://en.wikipedia.org/wiki/Miracle_on_Ice#The_Soviet_and_American_teams ) about the game, “consisted primarily of professional players with significant experience in international play.” The Americans, conversely, were all collegians (or ex-collegians; most of them turned pro soon afterwards) at a time when college hockey was a step – or several — below National Hockey League standards. The Russians, who more than held their own in a series of competitions against NHL squads throughout the 1970s, had won four consecutive Olympic hockey gold medals and had crushed this same U.S. squad, 10-3, in an exhibition at Madison Square Garden on Feb. 9, just prior to the start of the Games. And don’t forget, the Cold War was still raging. At a time when America didn’t feel very good about itself, it was a stunning shot in the arm at precisely the right moment. 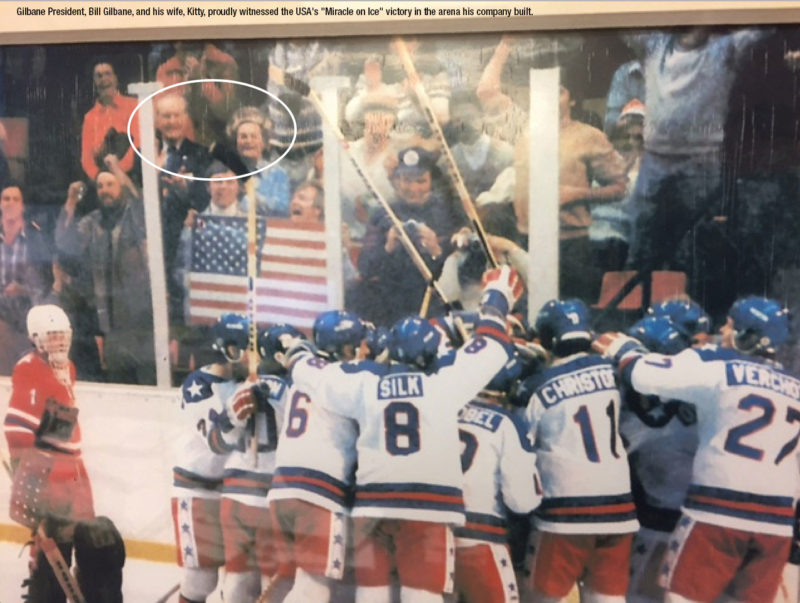 And in the seats, behind the net where Mike Eruzione scored what proved to be the game-winning goal, were the Gilbane brothers.

“They went through the Depression, and ‘Irish Need Not Apply’; sports was a huge thing for the Gilbane family and company,” said Bill Gilbane. “And for them to build that whole facility and to be at that game, behind the net where Mike Eruzione scored the goal, was . . . think of the thrill those two guys had.”

Bill Gilbane wasn’t in attendance – “I had so much wanted to be there,” he said, but an illness prevented him from going – so he and his wife watched it from home. He already knew the outcome; his father and uncle had called with the stunning news.

“But still,” he said. “You can watch it again today and get goose bumps.”

Indeed. Click below to see the final minute. Al Michaels – now known almost solely for his work on Sunday Night Football – was the announcer, and his excitement and incredulousness get more palpable as the clock winds down. Finally, at the 58-second mark of the video, he comes out with the call that lives to this day and will no doubt be in the first paragraph of his obituary: “Do you believe in miracles? YES!”

And Gilbane was our piece of that miracle.