In 1965, following what can only be described as an embarrassing showing by the US hockey team at the 1964 Games, New England took what many believe was one of the first real steps in drawing up the successful blueprint we have today for developing the best talent and teams to compete on the world stage.

Among the first players whose on-ice skills earned them a role in moving us in that direction were seven notable and highly accomplished Rhode Islanders.

Twenty years before the now famous “Miracle on Ice” team of 1980, which brought home the gold medal in Lake Placid, NY, there was another team making history on the opposite coast of the country in Squaw Valley, CA. They were the underdog 1960 U.S. Men’s Olympic Hockey Team, which upset some of the biggest hockey powers in the world to give America its first taste of Olympic hockey gold and glory. 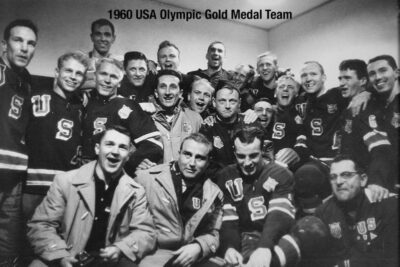 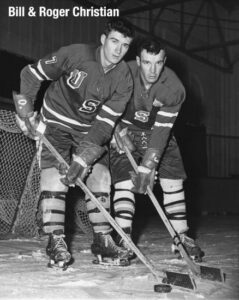 After their Squaw Valley success and the optimism it had engendered, much was expected of Team USA at the 1964 Games in Innsbruck, Austria. Outside of the Christian brothers, who were back in the fold, and a center named Herb Brooks, the other members of the team were neither household names then nor now. 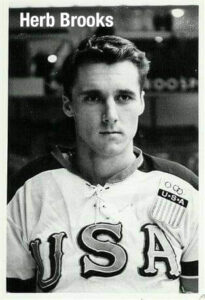 Outscored and outplayed throughout the tournament, they dropped 5 of their 7 games. “Manhandled” and “Outmatched” were just some of the kinder words used by the media to describe their play. Infuriating to many was the comment from one of the USA officials, saying, “There’s nothing to get worried about. We’re not a Winter sports people, anyway.”

Despite the 1960 success, the national sentiment in hockey circles for some time had been that the process of suiting up the best talent to compete in the Olympics was “unorganized.” One of various blueprints proposed to improve that process was to establish an Eastern Olympic and a Western Olympic amateur team every year – bringing together and developing the team play of the very best talent from the two most fertile parts of the nation’s hockey pond.

It was suggested that an annual East vs. West series would provide a constant appraisal of the talent and chemistry necessary to develop a “team” of the best lines and defensive pairs rather than depend on the reputations of individual talents who were relatively on-ice strangers to each other with little time to gel together.

Indeed, in the early years of Olympic hockey, the teams chosen to represent each country were not typically short-term compilations of players but actual amateur teams, many of them military outfits that competed together for long periods of time in the best regional leagues and against the best teams. They were battle tested as a unit and ready to compete on a world stage.

The East, and specifically New England, took up the task in 1965 with the formation of the Eastern Olympics Hockey Club. It was post-graduate hockey – a team comprising mostly former college stars brought together to improve individual and team play with the prospect of helping to rebuild Eastern hockey prominence and establish the USA as an international hockey power. 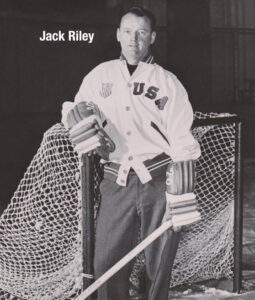 Jack Riley, coach of the 1960 USA Gold Medalists and a veteran of the 1948 Olympics, recalled that when he played in St. Moritz, “There were only a few Westerners. In 1960, it was 50-50. In 1964, there was only one Easterner. I believe this (Eastern Olympics team) is a step in the right direction to restore the East’s prestige.”

Integrating the players and molding them together within one system was one of the major objectives, since players – schoolboy or college – played within different systems under their different coaches. Among them were many All-Americans, USA National Team members, MVPs, and players who captained their college team, including Ray Mooney and Jack Keough from Providence College. 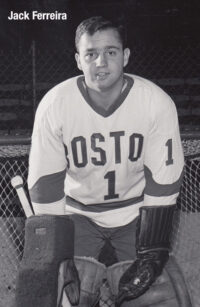 Lamoriello was especially productive as one of the team’s leading scorers against the high caliber schedule the Eastern Olympics played – all while balancing his then-duties as PC’s freshman hockey coach. It’s important to note that each player’s amateur status had to be maintained, including McGeough’s, who had enjoyed a full pro season at defense with the AHL’s RI Reds and was regaining his amateur standing. 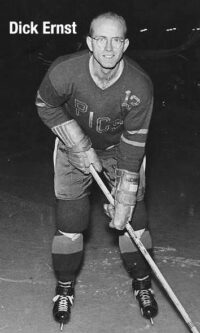 There were no paychecks being handed out for the opportunity to earn an Olympics nod. Almost all, having already graduated, faced the challenge of making games and practices while also holding onto a job and earning a living. Game and work schedules did not always align and that was a major obstacle for the team’s cohesiveness.

It was a deep and formidable schedule the Eastern Olympics played. Its NCAA opponents included the likes of Brown, Providence College, the University of New Hampshire, Boston University, Boston College, Harvard, and the University of Minnesota at Duluth, to name a few. The ‘Pics also faced off against a variety of all-star and pro teams like the New Haven Blades and other EHL squads. They also traveled to play tough Canadian competition, including Dalhousie University in Nova Scotia and the Hockey Clubs of Kingston, Saint-Hyacinthe, and Drummondville.

By the 1966-67 campaign, names like Jerry York, Paul “The Shot” Hurley, Ray Cunniff, and goalie Jim Logue (the only Eastern Olympics player to make Team USA in the 1968 Games) were now dotting the lineup. To assist in assuring there was always enough talent available to play the schedule, A and B teams were formed to better align players with their off-ice work obligations. The teams were playing exceptionally well and their record reflected it. However, their fortunes on the ice far exceeded their fortunes off it.

While the ‘Pics games often sold out on the road, sparse attendance cheered them at local games with little or no gate receipts. By the end of their second season and despite the generous sponsorship of the H.P. Hood Company and the donations of many other businesses, the sometimes desperation contributions of club organizers to sustain the mission had run their course. The finances required to support the team were falling far short.

Sadly, that lack of financial support along with its lack of a home rink resulted in the team merging with the independent Concord Coachmen senior amateur team out of New Hampshire in October 1967. With the merge, the team name was changed to the Concord Eastern Olympics, which would go on to play in the New England Hockey League for six years with few and soon none of the star talent that once wore the sweater.

That run ended after the 1972-73 campaign with the Eastern Olympics name never to grace a team jersey again. Although professionals have since been allowed in Olympic play and extended periods of team building is no longer possible, the model the Eastern Olympics started continues to expand.

Today, a highly organized USA Hockey development program produces talent and team play to compete and regularly win at the very highest levels of the game in every age group for men and women. And, as hockey history repeatedly reveals, Rhode Island was once again there – at the very beginning.