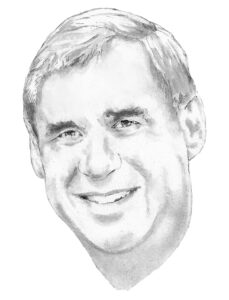 Buster Clegg has had a connection to the game of hockey in Rhode Island for most of his life and it touches all levels of the sport.

Born April 21, 1937, he was raised in Burrillville, R.I., when that town was a hotbed of hockey, especially at the high school level. He learned to skate and play the game as a kid on the town’s landmark Granite Pond and eventually became a regular on defense for the high school team coached by the legendary Tom Eccleston.

As a senior during the 1954-55 season, Buster capped his high school career by earning All-State honors on his Broncos’ team that captured the R.I. Interscholastic League championship and was edged out for the New England championship. A good student, he also was named to the National Athletic Honor Society for achievement in both sports and academics.

Buster attended the University of New Hampshire where he played hockey for four years. He was named a team MVP and co-captained the Wildcats as a senior in 1959, helping to lead the Wildcats to a 14-5 record.

After graduation, Buster joined the staff of the R.I. Reds as publicity director of the American Hockey League team and the Rhode Island Auditorium. He served in several other administrative capacities before being named the team’s general manager in 1966. He was one of the youngest general managers in pro hockey and one of the first hockey executives to focus on U.S. collegiate hockey as a source of future players.

For close to four decades, Buster, a Level 4 USA Hockey coach, was an active instructor in youth hockey while serving in a variety of capacities in the development of youth hockey programs throughout Rhode Island.. One of his teams, the East Providence Pee Wee All-Stars participated in the Invitational Youth Hockey Tournament at Lake Placid, New York. He was a founder of the Barrington Youth Hockey Association in the early 70’s.

Buster occasionally served as a between-periods TV analyst for Boston Bruins games. He also played amateur hockey for many years, including the RI Scarlets. He was also among the founders of an amateur team that represented the state in tournaments throughout the region. And he was a long-time member of the R.I. Oldies, the amateur group that listed Buster’s high school coach, Tom Eccleston, among its founders.

In 1999, Buster became the founding president of the R.I. Reds Heritage Society and the catalyst for the tremendous growth of that non-profit organization. The success of that organization is a reflection of the relationships and contacts he developed as general manager of that hockey franchise.

The Reds Heritage Society, one of the first of its kind and a model for others nationally,  is a unique organization that helps keep alive both the memories of the Reds hockey team’s 51-season existence and the significance of the game of hockey in the history of Rhode Island. He also has led the Society’s focus on the development of programs and awards focused on young players and fans of the game.

Buster was also a member of the founding Board of Directors of the Rhode Island Hockey Hall of Fame. It is unlikely that any one else has served the game of hockey in so many ways in Rhode Island history.