For the smallest state in the country, Rhode Island has certainly turned out more than its fair share of great hockey figures – on ice and off.  And behind the scenes there have been a number of key figures who ensured our players got the competitive edge they needed.

To the Rhode Islanders who chose to spend their time donning skates, Rollie’s Skate Shop will surely ring a few bells. Located in East Providence, RI Reds, PC Friars, and Brown Bruins, alike, would stop in to have their blades honed and ground to perfection by the trusted Roland “Rollie” Woodcock. Before his passing in 2013, Woodcock tended to every pair of skates (whether they be worn by a pro or pee wee) with the utmost care and precision. And the players and coaches knew it.

For those unfamiliar with Rollie’s Skate Shop, you might be wondering what made this place so special – aside from his gifted sharpening abilities. In the words of Woodcock’s son, Rollie, Jr., “It was half skate shop, half meeting place.” Though customers would enter Woodcock’s shop for freshly sharpened blades, they would often stay for the good company. The conversation was so good in fact that Woodcock Jr. recalls his father removing some seats in the shop because visitors would stay so long it became hard to get the work done!

If one could time travel back in time to the skate shop, you would be greeted by Rollie and the smiling faces of youth leaguers, high schoolers, college players, adult amateurs, figure skaters…and an old-timer or two.

The devotees spanned several generations. Among the newer, players like David Emma and Noel Acciari were two of the most recent who graced the small shop, oftentimes leaving behind a signed puck or photo marked with the phrase, “Thanks for the edge.”

Though the walls of the shop were covered in hockey memorabilia that would leave any fan filled with amazement and envy (including a display of over 750 signed pucks at the time of its closing), Woodcock made sure to leave space to post local hockey news and upcoming hockey and skating events. This bulletin board was called “Rollie’s Scoop” and was lined with fliers on hockey schools, camps, and more goings-on in the local community.

Woodcock had four siblings: Thomas, Edward, Marilyn, and Carol. Rollie was the youngest of the three boys, all of whom left their own mark on the RI hockey scene in unique ways. 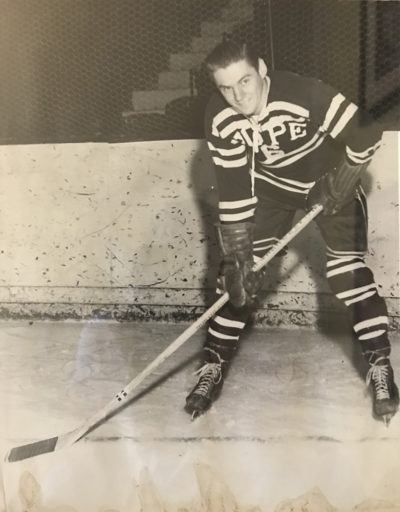 The Woodcock brothers all played hockey, and played it very well, at Hope High School in Providence. Tommy graduated in ‘59, Rollie in ’60, and Ed in ‘61. Though they graduated just three years apart, Tommy and Ed were much older than Rollie, both leaving school for a time, and in Tommy’s case, in order to help provide for his family when their father took ill.

Tommy, an All-Stater who played briefly in the pros and would eventually be enshrined in the Trainers’ Wing of the Hockey Hall of Fame in Toronto, can be credited with teaching Rollie and Ed how to sharpen a pair of blades. Tommy sharpened skates for the Reds while an assistant to legendary Reds’ trainer George Army. He used a custom-built sharpener made especially for him by machinist, Roger Guillemette, one of the early organizers of youth hockey in Woonsocket, RI, and whose son of the same name was a 1960’s star at LaSalle Academy and Norwich University.

When Tommy was hired by St. Louis to become head trainer for the Blues in 1967, his skate sharpening equipment went along with him. So, in order to start a business of his own, Rollie ordered a sharpener for himself from the same machinist. It was engineered for use with different grinding wheels, one for hockey blades and one for the different and shallower hollow required for figure skates.

Over the years, Rollie would stay close with his oldest brother. Whenever Tommy’s NHL teams played the Bruins in Boston, Rollie would take the drive up I-95 and assist his big brother with behind-the-bench business and always be back in time to open his shop bright and early the next morning.

In 1969, brother Ed, a one-time RI high school “Player of the Year”, became manager of the then-new Dudley Richards Arena in East Providence, not only the East Bay’s first indoor rink but the new home of The Providence Figure Skating Club. He brought his younger brother along and this is where Rollie would open his own skate shop. 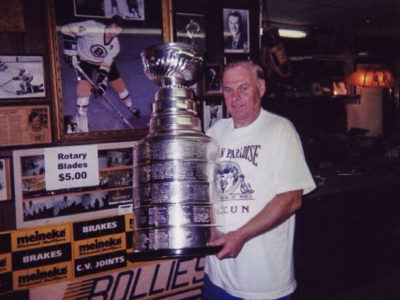 Here, at the epicenter of the state’s figure skating community and amid the excitement and rapid expansion of East Bay hockey, Rollie’s business and reputation soared. Woodcock operated there until the rink’s untimely closing in 1979. But he didn’t let this setback stop him from grinding away. Instead, he opened a new and larger shop just a short skate away off Newport Avenue – and the skaters followed.

At the new shop, a converted garage on Pioneer Avenue, Rollie expanded his services, offering a full line of hockey equipment and skating accessories, and providing sharpening services for lawn mowers and other garden tools and household items. Over time, as large sporting goods stores and the Internet began to erode his hard goods sales, he concentrated soley on sharpening while continuing to create bonds with his customers that would remain eternal.

One of those bonds was with Chris Lamoriello, son of Lou Lamoriello, who, according to Rollie’s lovely and ever-present wife, Muriel, was famous for last-minute emergency calls in his PC days, showing up at all hours carrying hockey sticks strung with skates. Rollie would never let him down.

Chris, who played with the Friars after his dad left for the NHL, knew from the best reference who to trust with his skates. He later worked with his father for the New Jersey Devils, as he now does with the NY Islanders. After the Devil’s 2003 Stanley Cup, their third with the Lamoriello’s at the helm, Chris made a surprise visit to Rollie’s Shop with the revered Cup in tow. Together, the younger Lamoriello and Rollie shared a special moment – a celebration of a lifelong friendship between an appreciative player and his master skate-sharpener. 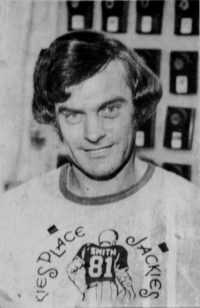 The last of the pros to have a connection with Rollie was Noel Acciari. From the age of five when Noel laced up his first skates and throughout his career as a Friar and later as a Providence Bruin, one thing remained the same: Rollie Woodcock would sharpen his skates.

Perhaps it was the way he sharpened or the smell of the broken hockey sticks smoldering in his wood-burning stove that made Rollie’s Skate Shop a “hockey Mecca”, as Rollie, Jr. says. But, more likely, it was the way Rollie offered camaraderie and conversation to every customer who walked through his doors that made the shop every hockey lover’s home away from home.

In honor of Rollie’s never-ending passion for the sport we all love, the Rhode Island Hockey Hall of Fame salutes the hundreds of like-minded individuals who continue to make Rhode Island hockey special – on and off the ice.  Many games would never see the light of day of be filled with special moments without the big assists received from these dedicated people behind the scenes.