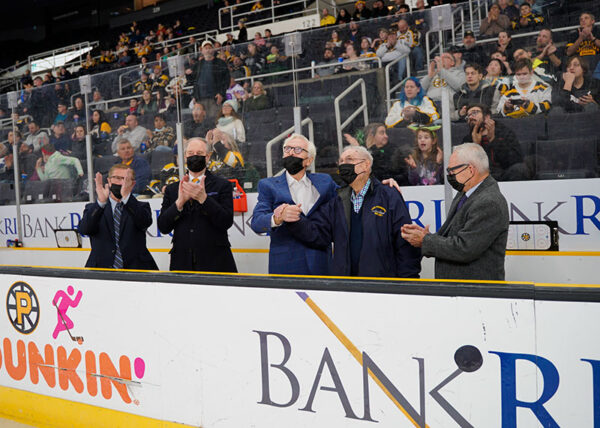 (Providence, RI) The names of five local hockey greats who represent the RI Hockey Hall of Fame’s “Class of 2022” were unveiled on February 25th between periods of the Providence Bruins vs Charlotte Checkers “Hall of Fame Game” at the Dunkin’ Donuts Center in Providence.

Vin Cimini, founding chairman of the Hall of Fame, noted that the five new inductees-elect are, “among the most accomplished our state has produced. Aside from their professional hockey careers and their play representing our nation, they each earned legendary status on the ice at their respective schools.” With their formal inductions in August, the number of honorees in the Hall will reach 37.

The Enshrinement Celebration & Dinner for the 2022 Class will be held on Saturday, August 20th at Rhodes-on-the-Pawtuxet in Cranston. Tickets are now on sale on the the Hall of Fame’s website – RIHHOF.com

TOM MELLOR
Tom graduated from the Cranston CLCF youth hockey program that his father, Don, co-founded. He starred at the Northwood School in Lake Placid, NY, before earning All-America honors at Boston College where his retired jersey hangs in the rafters of the Conte Forum. He played for Team USA on 3 occasions, taking home a Silver Medal at the 1972 Olympics before joining the NHL’s Detroit Red Wings. He ended his hockey career by being named MVP of the International Hockey League in 1977.

RALPH WARBURTON
This former LaSalle great captained Dartmouth College to the NCAA title during its famous 47-game unbeaten streak in the 1940’s. He then became Rhode Island’s very first Olympian, scoring a remarkable 16 goals in the 1948 Games in St-Moritz before leading the Rhode Island Scarlets to our state’s first National Amateur Championship later that year. He was previously honored by the Hall of Fame in 2018 as its first Malcolm Greene Chace Award recipient for lifetime contributions to the game.

HARVEY BENNETT, JR.
One of the stars of our state’s most famous hockey family, he led Cranston East to the Rhode Island state and New England championships before starring at Boston College and playing for 5 NHL teams over his pro career. He twice represented the USA in international play with his brother, Curt, who he will join, along with his father, Harvey, Sr., both charter inductees of the Hall of Fame in 2018.

ROBBIE GAUDREAU
A graduate of Bishop Hendricken, Robbie tied the single-season goals record at Providence College and was later selected an All-American, New England Player of the Year, and a finalist for the Hobey Baker Award as the USA’s best collegiate player in 1991. He went on to score the most goals of any native Rhode Islander to play in the National Hockey League. He will join his father, Bob Gaudreau, a 2021 inductee of the Hall of Fame.

BOB BELLEMORE
This LaSalle and Providence College goaltending legend backstopped the Friars’ first ECAC championship and Final Four NCAA title bid in 1964. After organizing and coaching Smithfield’s first high school hockey team and serving as assistant coach with the Friars, he became the longtime goalie coach for the NHL’s New Jersey Devils. He returned to PC to coach the Lady Friars’ goaltenders for 19 years and has been honored as our nation’s Assistant “Coach of the Year” in women’s hockey.