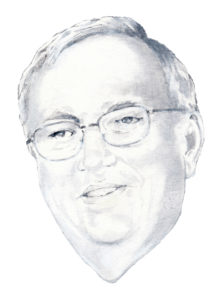 Larry Reid never learned to skate and did not play hockey. That didn’t keep him from distinguishing himself with his off-ice contributions to the game at the local, regional, national and international level over the last 50 years.

He is the 2019 recipient of the Malcolm Greene Chace Memorial Award for his “Achievement and Outstanding Service by a Rhode Islander to the Game of Hockey.”

Now 80 years old, Reid got involved in the game when his young son, Jeffrey, caught the hockey bug. It was the Bobby Orr era and the Dudley Richards Arena had just opened near the Reids’ home in Rumford, RI. Like so many youngsters at the time, Jeffrey was eager to play, so Larry signed him up.

“The East Providence Hockey Association had 700 kids and you were expected to help,” recalls Reid, so help he did. Before long, he was running the house league. Eventually, he became president of the EPHA, which fed the city’s powerhouse high school team as well as producing NCAA All-Americans and pros.

Regardless of ability, every player mattered to Reid, not just the elites. From 1982 to 1984, he served as president of the RI Amateur Hockey Association. A couple of years later, he started taking on high-profile responsibilities for USA Hockey.

He was asked to take charge of the 1986 Olympic Festival in Houston and ended up running Olympic Festivals for many years. Reid was the guiding force and the first chairman of the Yankee Conference Festival, which became the centerpiece of the NE Hockey District’s Player Development programs. Other districts across the country followed suit.

As a USA Hockey director, he helped set policy for all youth hockey across the country.
Larry became team leader for men’s and women’s national teams in international play and particularly savored that role with the women at the 2002 Olympics in Salt Lake City, the first woman’s team to compete in the Olympics on home turf. He also served as Technical Director for sled hockey.

He served for 18 years as a USA Hockey VP and Chairman of its marketing council. In 2017 he was elected a director emeritus of USA Hockey.

His long career in the game has been a labor of love. “I’ve been very fortunate. I’ve gotten much more than I ever gave,” Reid said.