The names of seven local hockey greats who represent the RI Hockey Hall of Fame’s “Class of 2020” were unveiled on February 22nd between periods of the Providence Bruins vs Springfield Thunderbirds “Hall of Fame Game” at the Dunkin’ Donuts Center in Providence. 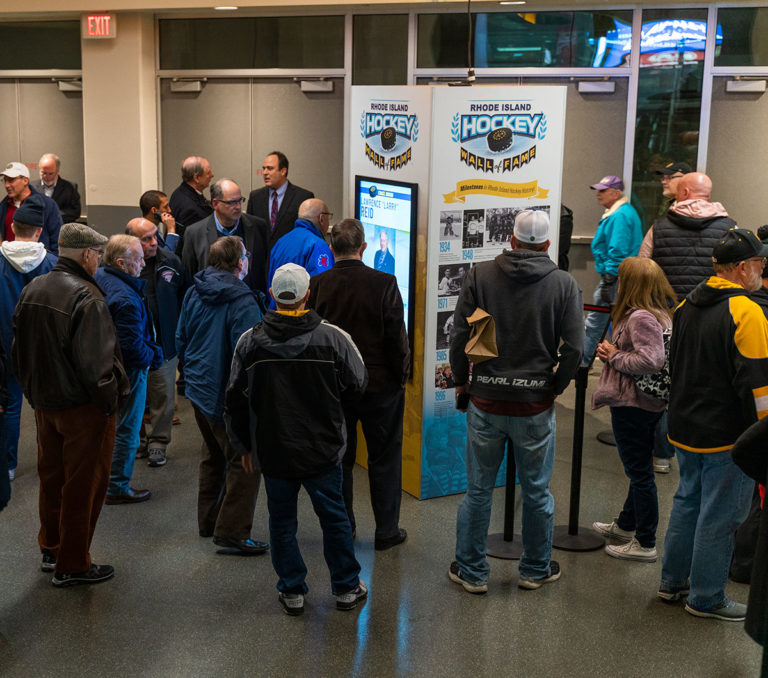 The occasion also marked the unveiling of the Hall of Fame’s new “Wall of Fame” at the Dunk.

“Chronicling Rhode Island’s rich hockey history and paying perpetual tribute to our hockey heroes like this year’s class has been our mission from the outset,” noted Hall chairman, Vincent Cimini, at the post-unveiling press conference. “This state-of-the-art touchscreen kiosk will provide a modern and engaging means to inspire and educate present and future generations,” he added.

The kiosk displays videos recounting the careers and achievements of all Hall of Fame inductees while showcasing the milestones in RI’s illustrious hockey history and its global contributions to the game.”

In alphabetical order, the “Class of 2020” inductees-elect are:

TIM ARMY
A member of one of RI’s most heralded hockey families, this East Providence native was a Providence College All-American and Hobey Baker finalist who led the Friars to the inaugural Hockey East title in 1985 before turning pro. Tim has gone on to coach more than 1000 collegiate, NHL and AHL games. He now coaches the Iowa Wild of the AHL.

DAVID CAPUANO
This Cranston native enters the Hall of Fame a year after his brother, Jack, was similarly honored. A former Mount St. Charles All-Stater, he is Maine’s all-time leading scorer, a 2-time All-American, 2-time Hobey Baker finalist as our nation’s top collegiate player, and former NHL standout. He is the first former Providence Bruin to be so recognized.

LOUIS A. CIMINI
This North Providence native and former Providence College football and baseball star, is already an inductee in 6 other Halls of Fame. LaSalle Academy’s legendary coach of 32 years guided his Rams to 5 RI and 1 NE title. He was the recipient of our nation’s prestigious Grantland Rice Award for Sportsmanship and Outstanding Service to Youth.

JACK FERREIRA
Raised in the Fox Point section of Providence, this LaSalle Academy All-Stater and Boston University All-American goaltender has served as General Manager, Director of Player Personnel, Scout, and/or Special Advisor for 9 NHL franchises. Jack has his name engraved on 2 Stanley Cups from his time with the Los Angeles Kings.

JIM FULLERTON
An inductee into the USA Hockey and USA Collegiate Halls of Fame, this legendary Brown University coach was the 1965 NCAA Coach of the Year. One of the great defensive innovators of the modern game of hockey, he was also the driving force behind the organization of the nation’s first women’s collegiate hockey program at Brown.

PAUL GUAY
A Woonsocket, RI native, this former Mount St. Charles great is Providence College’s all-time single-season goals leader and the first Friar to become a USA Olympian when he represented our nation in the 1984 Winter Games in Sarajevo. His 10-year pro career included time with the Philadelphia Flyers, LA Kings, NY Islanders and Boston Bruins.

GARTH SNOW
This Mount St. Charles All-State goaltender won the 1993 National Championship at Maine, where he led the nation in wins for 3 consecutive years before a sterling 13-year professional career. This former US Olympian served as GM of the New York Islanders for twelve seasons and was voted the NHL Executive of the Year in 2007.

Induction Ceremonies for the “Class of 2020” are scheduled for August 28th at the Twin River Event Center in Lincoln, RI. Tickets are available at RIHHOF.com.