Ahead of his time – Remembering Tommy Woodcock, a Rhode Island Hall of Fame Trainer

Former Hope High School hockey great Tommy “Woody” Woodcock was the original medical trainer of the NHL’s St Louis Blues. He worked for the club for its first 16 seasons. 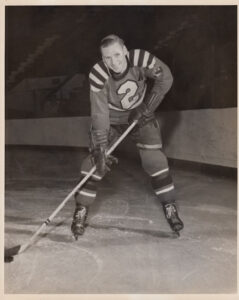 A 3-time All-Stater at Hope, he came from a highly-accomplished hockey family that included brothers Eddie and Rollie. Tom enjoyed a brief pro career in the RI Reds organization, before coming under the wing of George Army, the legendary trainer of the RI Reds. That apprenticeship led to his recruitment as the trainer for Jim Fullerton’s Brown University hockey team. 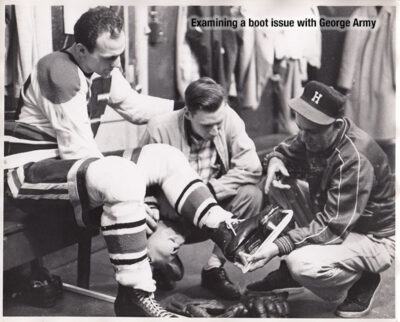 Tom sadly passed away this past summer in Connecticut at 89 years of age. Three hockey legends – Scotty Bowman, Bernie Federko and Garry Unger – were asked to describe RI native and former St. Louis Blues trainer Tommy Woodcock, and all three of them said the same four words:

Ahead of his time.

“I spent a lot of time with Tommy,” said Bowman, who served as the head coach of the Blues from 1967-1970, won an NHL-record nine Stanley Cups as a head coach and holds the League’s all-time regular-season record in coaching wins with 1,248. “When you have a new team (come into the League), you’re having to buy equipment, tape, sticks, you name it. I was there the whole year with Tommy, so I got to spend a lot of time with him and we got to know each other. We became good friends. 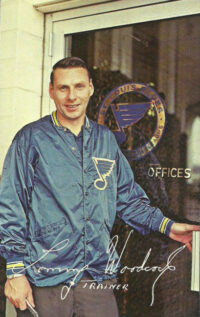 “His domain was the dressing room. He had a great rapport with the players, they just trusted him so much,” Bowman told stlouisblues.com. “He always had a little skip in his step. He was pretty busy, and he would be running around the arena, just a hop, skip and a jump. That was his life. He liked to have a good laugh, he never got down or became discouraged. He was one-of-a-kind and way ahead of his time, for sure.”

Woodcock worked with some legendary hockey names during his 1,362 games in St. Louis – Red Berenson, Al Arbour, Glenn Hall, Jacques Plante, Bernie Federko, Bobby and Barclay Player – you name a Blue from those eras and you can bet that player depended on ‘Woody.’

“He knew what he was talking about,” said Federko, who worked with Woodcock in seven of his 13 seasons as a Blue. “If you needed treatment for something, he would get you back as quick as possible, and in those days, you wanted to get back. You didn’t want to miss a game because you were always afraid if you did, someone was going to come up and take your job. You played through your injuries, even much more so than you do now. It was very important to have a really good athletic trainer, and that’s what Woody was. He was fantastic. Just a nice man, funny, happy-go-lucky. Woody was a great guy to be around.” 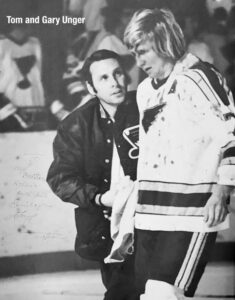 In those early days, medical trainers also served as the team’s equipment managers. In between treating players for bumps and bruises and deciding when to call the team doctor, the trainers also ordered gear, sharpened skates, taped sticks and helped carry hockey equipment from city to city.

Nobody saw the hard work and dedication of the trainers like Garry Unger, who claims he wouldn’t have achieved the NHL’s Iron Man record of 914 games in 1979 (now fourth-most all time) without Woodcock.

“Tommy could figure anything out. One time I was wearing leather skates, and I got hit in the side of the foot with a shot and it cracked the bone,” Unger told stlouisblues.com. “It swelled up and I couldn’t put my skate on because the fit was so tight. Tommy said ‘wait a minute, I’m gonna make a call.’ He got a phone number for a new skate company out of Montreal called Lange. They were ski-boot people. He got me a pair of those things in my size and I used them the next game. I wore those skates and played the rest of my career with Lange skates because they were more protective of my foot – and all this happened during the Iron Man streak.”

That wasn’t the only time Woodcock kept Unger’s streak alive, though. Sometimes the off-ice events needed his attention, too.

“I used to have a hayride every year at my farm around November,” Unger recalled. “We had a bunch of wagons and I’d throw some hay on there and all the guys and their wives would come out and we’d pull this hay-wagon around. We got rowdy one time and would throw guys off the hay-wagon. I remember Bobby Gassoff throwing me off once, and I got up and ran to catch it, and one of the players’ wives fell off, so I’d pick her up and throw her back on. Well in all that craziness, I got up in the morning the next day and my back was killing me. I could hardly walk. Woody put on a heating pad on my back, and it felt great, but only if I had the heating pad on. So he found a way to put a heating pad in my hockey pants, and he would heat them while he was on the bench. I’d finish my shift, come back to the bench, and he’d switch the pad with a hot one. Every shift. That’s how I got through three or four games.” 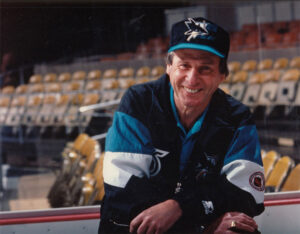 Woodcock left the Blues in 1983, following then-general manager Emile Francis to the Hartford Whalers, where he worked until 1991. That year, Woodcock helped get another expansion team off the ground, this time in San Jose, where he would finish his career in hockey in 2004 before returning to Connecticut.

“We always felt that if something happened to us on the ice, and our lives were in danger, Woody was the best person you could possibly have there to help you out,” Federko said. “He was the best at it. We were lucky at the Blues that we had someone that good.”