Its first came in 1948, at a time when USA Hockey was known as AHAUS, the Amateur Hockey Association of the United States. That year, the Rhode Island Scarlets captured the “Memorial Cup”, the trophy of the US National Seniors Championships, by defeating a team from St. Paul, MN in Toledo, Ohio.

The second came four years later, in 1952, when the Providence Maroons captured the US National Juniors title, defeating a Michigan six, the Antlers from Sault Ste. Marie.

That 1952 Juniors tournament was played in the St Dominic’s High School Arena, built in 1949 in Lewiston, ME, and the state’s first indoor artificial ice surface. Seven years later, the Arena was destroyed by fire and rebuilt as the Central Maine Youth Arena, site of the famous Ali-Liston heavyweight championship fight in 1965.

Of the eight teams that qualified for the single-elimination tournament, the Maroons were Little Rhody’s only entry. The other teams hailed from Lewiston, itself, made up mostly of St. Dom’s grads and undergrads and playing under the name of Bates Manufacturing, the team’s sponsor. Newton, Cambridge, Brookline and Malden qualified teams from MA. The most distant competitor was Sault Ste. Marie from Michigan.

Like the Providence Chicks and the Rhode Island Scarlets, before and after them, the Maroons chose their name in homage to the colors and influence of the American Hockey League’s Providence Reds, whose old uniforms it wore courtesy of team owner Lou Pieri, trainer George Army and the efforts of George’s son, Tom, then co-captain of the Providence College Friars. 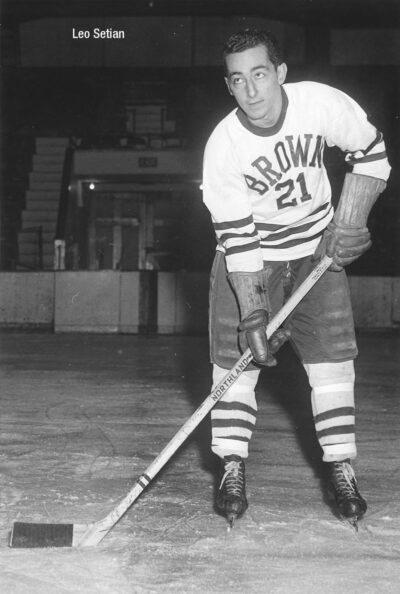 Sepe recalled his personal pride and excitement to have been recruited to play on the team. “We piled into our cars and joined up for a caravan to Maine. It was fun.” he remembered. “Here I was about to play in the biggest games and tournament in my life with guys I had watched and admired as a rink rat at the RI Auditorium.”

Interestingly, the following year, Bill transferred from Hope to Hebron Academy, not far from St Dom’s where the 1953 National Juniors were once again being staged. And, once again, Bill was recruited to play in the tournament, only this time with St. Dom’s and this time playing against Bob Borah and fellow Rhode Islanders and friends, like LaSalle’s Bob “OC” O’Connor and Hope’s Tommy Woodcock, who were skating with the Providence Jr. Reds’ entry in the field.

The Maroons had a relatively easy time dispatching the Cambridge Mahoney’s 6-3 in the opening round of the tourney with star forward Leo DeMarco notching the game winner. Providence followed with a narrow, hard-fought 3-2 win over the Newton Junior Pics in the semis with Bob Fisher scoring the winning tally just :34 into the second stanza.

The Maroons played the championship matchup against Michigan’s Sault Ste. Marie Antlers without the services of two of their stars, Frank DiBiase, due to an eligibility question, and high-scoring forward, DeMarco, who was injured in the semis. That didn’t matter on a team built with depth.

In the title finale, both teams appeared fatigued, this being the third game they had played over a 36-hour period. And the play was rough as Leo Setian could testify as he was bloodied with a high stick to the head and could not continue.

The Maroons’ legs proved to be the deciding factor. Trailing 2-1 after the first period, Providence stormed back with 4 unanswered goals over the next period and a half. Defenseman Art Petit led the charge with 2 goals and an assist as the Maroons won going away, heading home with a 6-3 victory and a silver trophy anointing them the AHA National Juniors Champions for 1952.